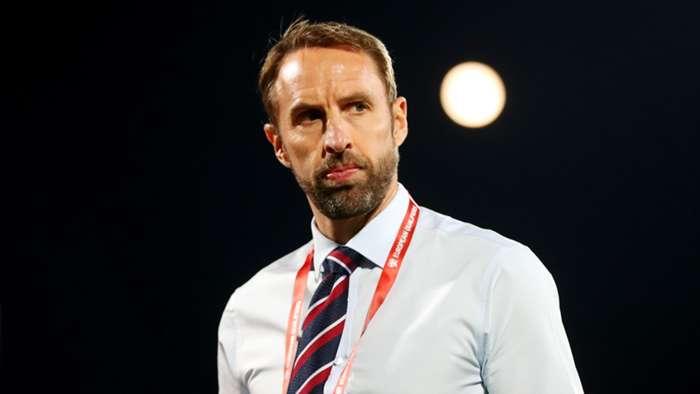 Gary Neville has questioned Gareth Southgate's "predictable" tactics and defensive selection policy in the wake of England's loss to Denmark.

Christian Eriksen scored the only goal of the game from the penalty spot as the Three Lions struggled to create any clear cut chances.

Their cause was hampered when Harry Maguirewas sent off for a second bookable offence on the half-hour mark, with the Manchester United defender penalised for lunging in onKasper Dolberg after failing to control a simple pass.

Mason Mount almost levelledthe scores late on, but Kasper Schmeichel managed to keep out his close-rangeheader as Denmark held on for a famous victory.

Reece James was also shown a red card after the final whistle for voicing his frustrations towards Spanish referee Jesus Gil Manzano, with the Three Lions now facing an uphill battle to qualify for the Nations League finals.

Southgate stuck with the same rigid formation which saw England to a 2-1 win against Belgium on Sunday, but Neville has criticised the 50-year-old's conservative approach after seeing the team's obvious attacking flaws exposed by the Danes.

"The issue with the 3-4-3 within the last two games is you end up with 8 ( inc GK ) defensive / positionally rigid players on the pitch," the former England defender wrote on Twitter. "If you add Harry Kane to that who is more of a fixed Striker you have 9 players that don’t interchange and rotate. It’s a little predictable."

Belgium picked up a 2-1 win over Iceland to move back to the top of League A, Group 2 after four fixtures, with England set to come up against Roberto Martinez's side again during the next international break in November.