Neymar & Mbappe's futures, a mounting injury crisis and the problems Pochettino must solve at PSG 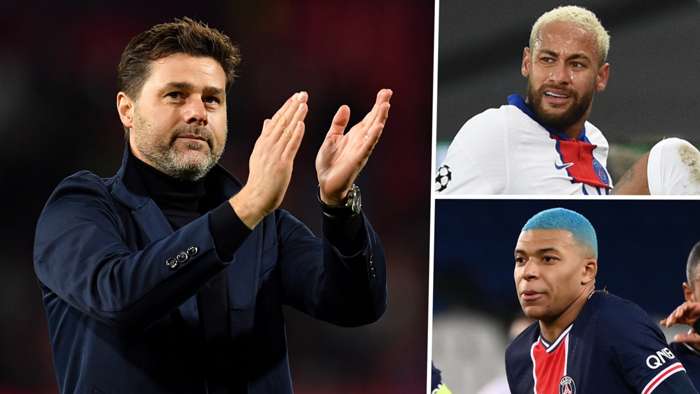 When Mauricio Pochettino elected to take charge of Paris Saint-Germain, he was agreeing to takeone of the most demanding jobs in world football.

Indeed, the German was sacked following a 4-0 victory over Strasbourg, with his side just a single point off the summit of the domestic standingsdespite an injury crisis that has gripped the team virtually since they took to the field in July following the suspension of play due to the coronavirus crisis.

So what does success for Pochettino at Parc des Princes look like? And how does he avoid a similar fate to Tuchel?

Goal takes a look the major issues facing the Argentine coach in the French capital...

Pochettino’s first game will arrive against Saint-Etienne on Wednesday – and it is a match in which he can expect to be without a raft of important first-team players, including Neymar, Mauro Icardi and Presnel Kimpembe.

While the coronavirus suspension brought unique challenges that evidence showshas brought about an uptick in injury problems at the majority of Europe’s biggest clubs, these concerns have been particularly prevalent at PSG.

Barely a game has gone by this term in which the Parisians have not been without four or five starting players. Although their squad is impressive, a combination of these absentees and the rate at which the matches are being played this season have meant that the levels of the even the fit members of the squad have been notably eroded.

Kylian Mbappe, for example, spent the month of December flirting with the dreaded ‘red zone’, the point at which injury becomes increasingly probable. His performance levels were impacted and so too were those of the team.

Even before this season, though, Tuchel’s critics had pointed to the worrying number of injuries in the squad as a criticism. Neymar, for example, has barely played a single European knockout match for PSG in a fit state during his three-and-a-half years with the club.

If PSG are to operate at their optimum level, Pochettino must find a way of limiting this damage.

Once Neymar and Mbappe are back on the field, Pochettino faces a challenge of getting them to buy into his system.

Although he has been influenced by Marcelo Bielsa’s all-actiongame from his time with Newell's Old Boys, Pochettino does not subscribe to the madcap pressing favoured by his compatriot.

He has, however, insisted on a certain degree of industry from each member of his team. This comes in contrast to the laidback style of play favoured, in particular, by Neymar.

Defensive work has never been his forte, and although the Brazil international showed that he can impose himself at both ends of the field during the Champions League's 'Final 8' in Lisbon during the summer, getting him to subscribe to such a playing style on a long-term basis promises to be an arduous challenge.

Mbappe, too, is not someone who leads the line by pressing with the intensity of, say,Edinson Cavani.

In reality, Pochettino is likely to have to make do as best he can with regards the attitude of the star players, though it may mean sacrifices are made elsewhere in the side.

A switch in formation also seems likely, too, with the Argentine set to impose a 4-2-3-1 system upon a team that has worked best in a 4-2-2-2 since the beginning of the season and has otherwise switched to a 3-5-2 when pressed.

With a group of players less malleable than those at Tottenham, it will be a fresh challenge.

Linked to the previous point to some degree, Pochettino will have to lean on the talents of Neymar and Mbappe whether he wants to or not.

PSG are a side built to function best when their superstar duo are firing, and are notably lacking goalscoring options in the centre of the field. The January transfer window is unlikely to change much, with the Parisians likelier to sell than recruit significantly.

While there may be longer-term scope for Pochettino to work without the pair, his 18-month deal is likely to compel him to optimise the impact that both can have in the short- to medium-term.

Again, this will be no straightforward task, as the duohave notably been able to dominate the locker room in Paris over the last couple of years.

The spectre of two expiring contracts will make his life even more difficult in this regard. Both players, through their marketing prowessand on-field abilities, have a certain leverage in this situation as they can both force moves come the summer transfer window.

Neymar, particularly, may have the ability to lure Lionel Messi to PSG on a free transfer this summer, adding further value to his presence.

They need to be delicately treated at the best of times, but particularly over the next six months, which promise to be a pivotal time for the club.

Tuchel’s downfall in Paris was as much due to his inability to get on with sporting director Leonardo as it was because of poor on-field results, with the Germany coach havingpublicly criticised the former Brazil international for his dealings in the transfer market.

Leonardo has shown himself to be willing to rule with authority, and yet, from Pochettino’s history with Tottenham, he has displayed traits the suggest he is unlikely to back down to the sporting director either.

It is essential for the smooth running of any club with a head coach-sporting director combination that the synergy between the two is strong.

Pochettino’s time at PSG, then, can only be successful if there is peace between himself and Leonardo.