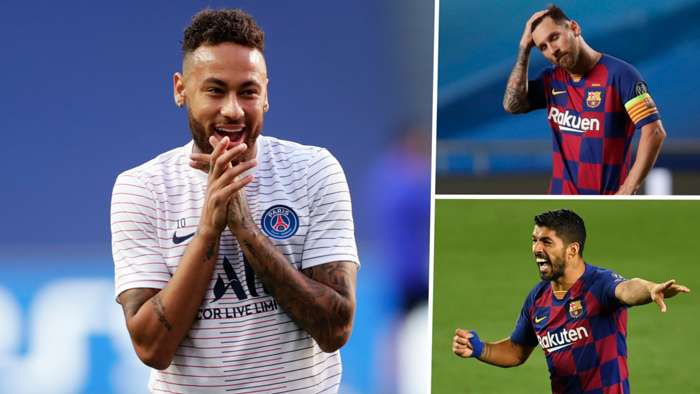 Neymar has played a pivotal role in Paris Saint-Germain reaching their first Champions League final but La Liga analyst Scott Minto still believes that the Brazilian should have stayed at Barcelona.

However, on Sunday he will have the chance to lift the trophy that he and PSG crave the most, the Champions League, with Thomas Tuchel's side scheduled to take on Bayern Munich in Lisbon.

Given former club Barca are in the midst of a sporting, financial and institutional crisis, many pundits believe that Neymar's decision to leave Catalunya has been vindicated.

Minto disagrees, though, arguing that both Barca and Neymar would be better off today had the 28-year-old stayed at Camp Nou.

"PSG have their best chance ever to win the European Cup," Minto told Goalspeaking at Hotels.com Dream Screen. "But would it justify Neymar's decision to move to PSG? I would still say no.

"I think that was the best front three in the history of football, so it is a shame he left."

Minto was impressed with PSG's performance in their 3-0 semi-final win over RB Leipzig and feels they have every right to be confident of winning a maiden European Cup, given they also boast Kylian Mbappe and Angel Di Maria in attack.

However, he still feels that Bayern are the favourites to prevail in Portugal, particularly in light of their stunning 8-2 demolition of Barcelona in the quarter-finals.

"Messi is the best player in the history of the game but that game showed that one great player can't beat a great team," Minto argued. "Against Bayern, Messi's team-mates were unable to step up."

Should Neymar's colleagues also fail to meet the formidable challenge facing them, Minto believes Robert Lewandowski will be recognised as the best player of 2020.

"Lewandowski has 55 goals," he pointed out, "and I think you would have to give him all of the individual honours for winning a treble, especially with no international competitions this year."