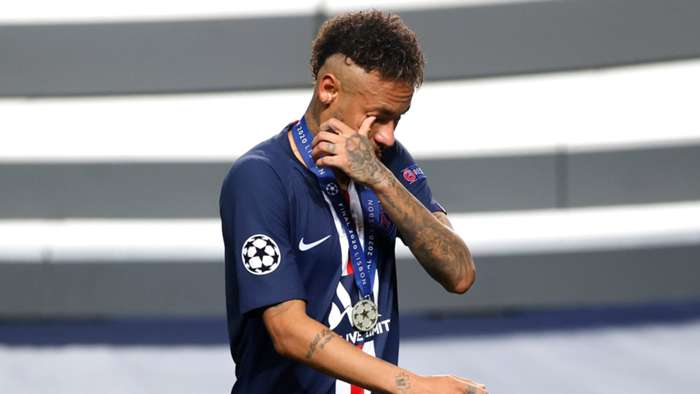 PSG failed to add an elusive piece of silverware to their collection after being beaten 1-0 by Bayern atEstadio da Luz in Lisbon on Sunday.

Thomas Tuchel's men created the clearer openings in a tense first half, but Manuel Neuer kept out efforts from Neymar and Kylian Mbappe to ensure that the teams went in level at the interval.

Hansi Flick's side held on a for a victory which saw them complete the treble, emulating the achievements ofJupp Heynckes' class of 2012-13.

Neymar was overcome with emotionafter the final whistle, and although David Alaba sportingly attemptedto console his opponent, the Brazilian's tears flowed as the reality of the defeat began to sink in.

The world's most expensive player eventuallycomposed himself enough to send out a tweet congratulating Bayern on their victory, but was left red-faced after forgetting to type the final letter of the team's name.

Neymar ended up paying tribute to Bayer Leverkusen by mistake, as he stated: “Losing is part of the sport, we try everything, we fight until the end. Thank you for the support and affection of each one of you and CONGRATULATIONS to BAYER.”

Leverkusen issued a swift response to the PSG star via their official Twitter account, which reads: "Obrigado @neymarjr. I’m not sure why you congratulate me if I'm on vacation playing FIFA,but thanks.”

Tuchel jumped to the defence of Neymar and Mbappe after their off-night in front of goal, as he told RMC Sport post-match: "We've lacked efficiency. We want Kylian and Neymar to score all the time. I'm proud because Ney had another amazing game. He showed his abilities, his mentality.

"For Kiki, it’s difficult. It was a miracle that he was with us after injury.

"It was a real fight! We gave our all, we left our hearts on the field. We couldn’t control the outcome. It was a goal that made the difference between two super strong teams. I'm very proud of the way we played, of our mentality. That's all a coach can ask of his players.