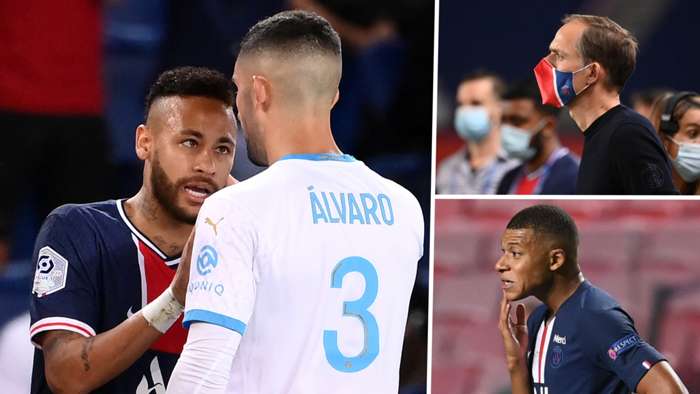 Since coming agonisingly close to realising a dream, Paris Saint-Germain have endured a nightmare period.

While they have played a game fewer than the vast majority of their rivals, this is clearly not where such an expensively assembled squad expect to be, even at such an early juncture in the season.

Life comes at you fast – and no-one is more aware of that fact than PSG’s coach, Thomas Tuchel, and their sporting director, Leonardo, whose simmering tension over the club's transfer policy is a long-term issue that needs to be swiftly resolved if the capital club is to get its campaign back on track.

When they face Metz in their rearranged matchday one fixture on Wednesday, they will have to do so without Neymar, Leandro Paredes and Layvin Kurzawa– all of whom were dismissed in Sunday’s ugly 1-0 defeat to Marseille.

Kylian Mbappe, who has an increasingly complicated contract issue to resolve before next summer, remains in isolation following a Covid-19 infection and will also be missing.

Marseille arrived at Parc des Princes with the intention of playing a spoiling game, and against an opponent painfully lacking in quality beyond Neymar, the visitors pinched a goal and successfully niggled their rivals to such an exteny that the majority of players were involved in an on-field melee seven minutes into stoppage time that saw referee Jerome Brisard brandish five red cards.

Neymar was adamant that he had been racially abused by Alvaro Gonzalez, appealing to the fourth official on his way up the tunnel, and then via social media in the aftermath of the game.

“My only regret is not hitting that asshole in the face,” he said before accusing Gonzalez of a specific slur against him.

The Spanish defender, who was rushed back into the starting XI after overcoming Covid-19 precisely because of his ‘grinta’, denied the allegations.

“There is no place for racism. A clean career and with many team-mates and friends on a day-to-day basis. Sometimes you have to learn how to lose and accept it on the field,” he tweeted.

On Wednesday, the French League’s disciplinary committee will meet to consider the outcome, which is set to be a full and probably very lengthy investigation into the actions of both players.

From PSG’s perspective, the world’s most expensive player could be banned for as much as seven matches if punished to the full extent of the law, a prospect that Tuchel admits has him “very worried”.

Meanwhile, the ex-Dortmund boss was otherwise content with what he witnessed during Sunday’s game, which was more a chaotic festival of maleficence than a celebration of footballing quality, despite his full-time analysis.

“I was almost surprised to see how we controlled the match against Marseille,” he explained. “There were two or three classes of difference between the two teams. Our statistics were extraordinary. They had all the luck in the world; it's hard to accept that.”

The stark reality is, though, that from two matches, PSG have mustered just five attempts on target, despite averaging over 67 per cent of possession from those fixtures. Indeed, the most “extraordinary” statistic is PSG’s blank points column.

Since the coronavirus crisis, the club have been flirting with such trouble, though.

They narrowly escaped elimination in the Champions League quarter-finals Atalanta by throwing on Kylian Mbappe to overturn a 1-0 deficit in the dying seconds of their game against Atalanta, but the coronavirus cluster in their squad has since exposed a group that is lacking in depth.

Against Lens, debutant teenagers Kays Ruiz-Atil and Arnaud Kalimuendo made up two thirds of the attacking line, with the other spot filled by Pablo Sarabia, who has looked out of sorts when called upon since the resumption of play.

Meanwhile, Idrissa Gueye only remains in the side for want of other options as he is currently going through a difficult phase, while Julian Draxler’s stubborn refusal to move has gentle echoes of the Gareth Bale situation at Real Madrid – he knows he won’t earn the same money elsewhere and is quite happy picking up a giant wage as a replacement.

And this is where PSG’s short- and long-term problems come to a confluence, as the sporting director and coach clash in how best to proceed in the transfer market.

“The squad is too thin. We need more players and more quality," Tuchel lamented on Sunday before reeling off the names of the four players he has seen depart this summer: Thiago Silva, Edinson Cavani, Thomas Meunier and Eric-Maxim Choupo-Moting.

That PSG scrambled to keep the latter, a figure of fun for much of his two years at the club, and yet saw him turn down their advances, unhappy at the duration of the deal he was offered, was an embarrassing blow.

It begs the question: if PSG cannot even convince a player such as Choupo-Moting, who arrived at their door having been released by Stoke, who can they hope to sign?

A combination of Financial Fair Play (FFP) restrictions and the Covid-19 crisis mean that even the vast wealth of QSI cannot easily be exploited, but while that means that Tuchel does not have – and is unlikely to get – the kind of squad he would have wished as PSG seek to go all the way in the Champions League, it also offers him greater job security as the board are reticent to pay him off.

Just as there will be no quick resolution to Sunday’s on-field warfare, with round two set to arrive in Marseille in early February, there is no easy solution to the situation that Tuchel and Leonardo find themselves.