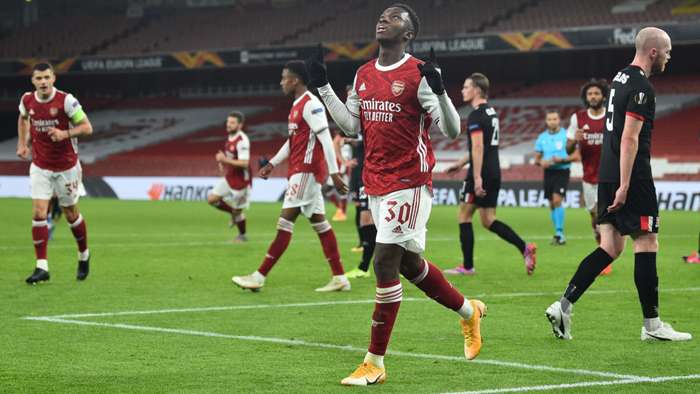 Eddie Nketiah has admitted concerns over his playing time under Mikel Arteta at Arsenal, after being named the captain for Englands campaign at the Under-21 European Championships.

Aidy Boothroyds side will take on Switzerland on Thursday before matches against Croatia and Portugal in a difficult group for the tournamentin Slovenia.

The Arsenal No 9 has been a key player for Boothroyd and became the record scorer at this level during the last international break, surpassing a record held by Alan Shearer.However, there are now concerns over his match fitness after he failed to make Artetas last six league matchday squads ahead of the tournament.

Nketiah, 21, is proud to be captain for the Young Lions and have a platform to prove himself on.

"Its been a difficult month or so for myself. Ive not played as much as Id like to but Ive worked hard and stayed dedicated," he said. "Ive got a great opportunity in front of me and Aidy was in communication throughout.

"Ive a big tournament ahead of me and Im grateful for the opportunity to achieve something special. Its a big honour to even represent your country in a major tournament, nevermind be captain.

"To get that responsibility is a great feeling and one Im proud of. Im looking forward to getting onto the pitch and contributing to something special. I was delighted, smiling [when told by Boothroyd]. Im grateful for the opportunity and the responsibility hes given me."

"My captain is Eddie Nketiah," Boothroyd said ahead of the tournament, where England are expected to be contenders to win.

"Eddie is one of our leadership team. He is the record goalscorer for the U21s which is a huge achievement when you consider he beat Alan Shearer to the former record.

"He is an intelligent guy, humble and hard-working. Thats even before talking about his football. He is just a guy everyone likes and respects. He is a top man, so he was the right choice I thought."

The youngster has just 15 months left on his current contract in north London and he faces a pivotal summer.

Similarly, the Gunners see Alexandre Lacazettes deal expiring in June 2022 so they have a decision to make on what to do around contract renewals for their forwards.

From talent of the century to Arsenal bit part: Whats going on with Martinelli?