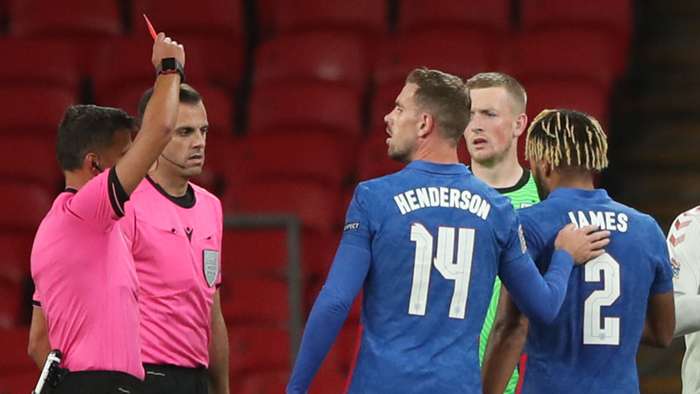 Chelsea manager Frank Lampard says that he was impressed by Reece James' first two appearances for England and admitshe doesn't hold it against the defender that he was sent off for an incident with the referee.

The international break was a difficult one for Chelsea as Edouard Mendypicked up a minor thigh injury and is out for the upcoming matchagainst Southampton, while Thiago Silva travelled back too late from Brazil to be in the selection.

Ben Chilwell and Christian Pulisic are fit, while the international break also saw James' stature grow as a footballer as he made his first two appearances for England.

However, James was sent off on his full debut against Denmark on Wednesday after a moment of dissent with the referee after the finalwhistle.

Lampard was impressed with the right-back despite the incident and was not surprised to see him named the man of the match against Denmark by some of the pundits watching on.

"I agree on his performance that he was very, very good," Lampard said in a Zoom press conference ahead of his side's return to Premier League action.

"He was very comfortable and he looked like he had been playing at that level for a long time. I did have a word with him about the end and how he got involved with the referee. Listen, we are all human and I have been there and done it maybe as a manager and as a player.

"So none of us are saints in that regard but it is one for him to learn from that when you have a performance of that level like he did for his country, that he will get a lot of plaudits. There was no need for him to get involved with the referee after. It was a pretty simple conversation and he will definitely take it on board."

Lampard also revealed that he has been working on how to get Hakim Ziyech match fit and that his call up with Morocco saved the Blues from arranging a behind-closed-doors friendly for the new signing.

Ziyech's £37 million ($47m) move was announced as far back as February, with the Dutch season then ending in March due to the coronavirus pandemic.

That, along with an injury setback in the club's only pre-season friendly, has meant that the 27-year-old has been without competitive football for seven months.

As a result, Lampard was happy to see Ziyech called up by Morocco coach Vahid Halilhodzicahead of his debut for the club.

“No, I was actually pleased with it," he added. "It was an open conversation going into it where Hakim spoke to me and I know he had close conversations with their manager.

"So the ideal result was that he played 30 minutes for his country, which was exactly what he needed at that time, and then came back and did some more training with us. It worked out well for us, no problems.”