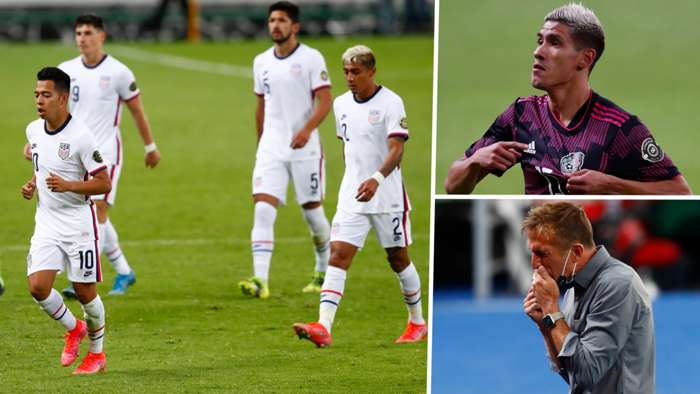 Its a familiar phrase, almost cliche. But, that was U.S. U-23 mens national team head coach Jason Kreis assessment of the teams CONCACAF Olympic qualifying group stage finale against Mexico. A rivalry match that lacked a little sting, a group-stage finale without much in the way of stakes.

In the end, Kreis assessment couldnt have been more correct:it was a game that was what it was.

The U.S. ended up losing the battle, falling 1-0 to their local rivals in their group stage finale. With the win, Mexico claimed their spot atop the group and a meeting with Group Bs runner-up. The U.S., meanwhile, will face Group Bs winner, either Honduras or Canada, in their semifinal match on Sunday knowing a spot in the Olympics is on the line.

Lost the battle, but the war goes on.

"So, we need to move forward very quickly and prepare ourselves for that."

That line was Kreis talking point in the days leading up to Wednesdays match: winning against Mexico would be nice, but booking a spot in the Olympics would be even nicer. With that in mind, Kreis was tasked with finding a balancing act, one that would give the U.S. a chance against El Tri while not jeopardizing what was to come.

Realistically, there were two ways that Wednesdays match could have gone for the U.S. It could have been a success, setting them up for their all-important semifinal match. Or it could have been, as Jonathan Lewis said pregame, "a battering", a statement from their local rivals that reaffirmed who remains CONACACFs top dogs.

What they got, in the end, was somewhere in the middle. It wasnt a success, but it wasnt a failure either. The U.S. didnt get "battered", not by a longshot. They held their own against a Mexico team that is much closer to a full-strength U-23 side. They had moments that looked good, plenty that looked bad but, by and large, those moments were somewhere in between.

The one truly bad moment came just before halftime, and it was ultimately one that decided the game. Sebastian Sotos giveaway kickstarted a sequence that led to Uriel Antunas 45th-minute goal and, ultimately, the Mexico win. Kreis, though, took some solace in the fact that the U.S. wasnt totally overrun, but rather undone by one individual mistake.

Mexico had the better of the play without a doubt, but the U.S. centerbacks rarely looked in true danger. Henry Kessler andMauricio Pineda each made spectacular tackleson the day but, by and large, Mexico didnt create too many chances.

Unfortunately for the U.S., they didnt either. Andres Perea, Johnny Cardoso and Hassani Dotson struggled to generate much going forward while Djordje Mihailovic, one of the teams primary creators, was given the old CONCACAF welcome from Mexico, who fouled him over and over and over again early on.

In three total games so far in qualifying, the U.S. has produced just one truly impressive attacking half, giving the team reason for concern heading into the semis.

"Going back to the creativity question, its a difficult one for me," Kreis said."We have who we have. We have players that I think are very useful for us in the midfield. When were playing an opponent like Mexico, youre not getting a lot of time and space on the ball to make those decisions.

"I think, ultimately, from my point of view against that opponent, we still created enough. We still got to the final third enough times, and so for me, its not about the creativity of a central midfielder.To me, its just about finishing attacks and what youre doing in the final third."

In three days, the U.S. will get that chance against either Canada or Honduras, two tough opponents that are more than talented enough to play spoiler. Theyll have a full complement of players for that game, though, with Justen Glad and Jesus Fereira, the only players the U.S. had on yellow cards, emerging without bookings on Wednesday.

So, by that measure, the loss to Mexico was a success. The U.S. remain on course for their ultimate goal, even if a loss to Mexico will serve as a minor speed bump along the way.

And so went a game that the U.S. will immediately forget. There are more important days ahead.