One sitter, Pogba & Fernandes in front' - Neville reveals how Man Utd midfield stars can play together 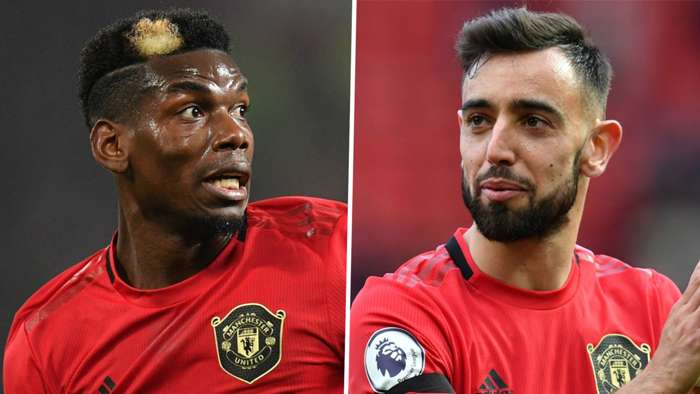 Paul Pogba and Bruno Fernandes should be used together as an advanced pairing in Manchester United's midfield, according to Gary Neville.

A number of midfield configurations have been deployed by United bossOle Gunnar Solskjaer, with Fernandes ahead of Scott McTominay and Fred the current iteration - preferred ahead of the Portugal international in front of Pogba and Matic.

Neville feels Solskjaer should playing Pogba and Fernandes further forward together and use one defensive midfielder to cover - much like Manchester City have used Kevin De Bruyne and David Silva in past seasons.

"I think it's a problem when you have a £150 million worth of midfield players on the bench," Neville told Sky Sports.

"You've got a player (Pogba) who has won a World Cup, he's been dominant in Europe with Juventus, he's Manchester United's record signing - yet he can't get in the team at the moment.

"Me and Patrice Evra disagreed before the Man Utd vs Chelseagame on Saturday. Patrice was disappointed with the team selected because he felt that Manchester United were rotating and not playing their strongest team.

"I think Ole thought Saturday's team was the strongest team. For me, I've never understood why Ole hasn't tried - maybe he has looked it at in training and hasn't liked it - why he hasn't tried one sitter with Pogba and Fernandes in front, like De Bruyne and Silva.De Bruyne and Silva weren't disciplined midfield players before Pep Guardiola came to Man City - he made them that.

"That's the only system I can see where it would be obvious where you could get those two into a position. More often than not, Ole has played Matic with Pogba sitting alongside and Fernandes in front. Pogba can't play there well because you need to be disciplined, but with a one and two I think you can have a bit more freedom to run forward."