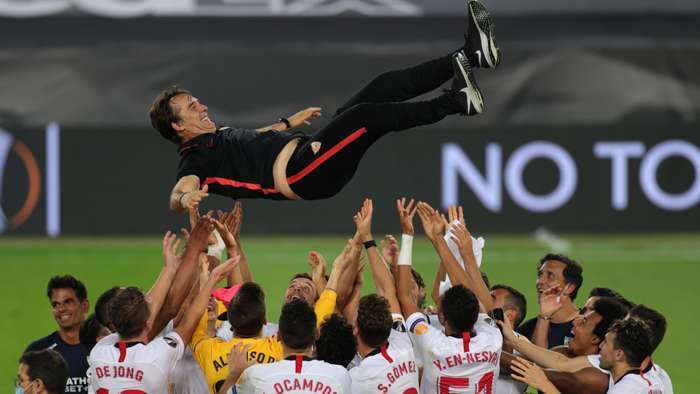 Sevilla saw off Manchester United 2-1 in the semi-finals to set up the clash with the Italian giants, who thrashed Shakhtar Donetsk 5-0 in their last-four tie.

Antonio Conte's free-scoring Inter side got the openerat theRheinEnergieStadion, with Romelu Lukaku netting his 34th goal of the season from the penalty spot with only five minutes on the clock.

Inter then scored an equaliser of their own through Diego Godin, before both teams managed to compose themselves defensively while looking for a winner.

The all-important final breakthrough came late in the second half, when Lukaku put through his own net in unfortunate fashion after sticking out a leg to try and block a Diego Carlos overhead kick.

Sevilla held on for a famous 3-2 victory, and Lopetegui paid tribute to two-goal hero De Jong and the rest of his squad for their never-say-die attitude.

"Luuk de Jong is a very good player, he worked for his moment and he was ready in the right moment.

"We had three penalties in the last three matches in the first five minutes but our team never surrenders."

Lopetegui went on to comment on the imminent departure of Ever Banega, who will soon undertake a new challenge inSaudi Arabia after three successful years with Sevilla.

De Jong says that Loopetegui told him he was starting the final at the eleventh hour, and he was glad to repay his manager's faith on the biggest stage.

"It is incredible. We had such tough games all tournament but we played so well as a team," the Dutchman told BT Sport.

"We were like a family, we worked together. It didn't matter who came in. It was tough. We started well but they scored out of nothing. Two goals, amazing feeling for me.

"The manager told me this morning I was starting. I told him I am always ready when he needs me and today it worked really well."