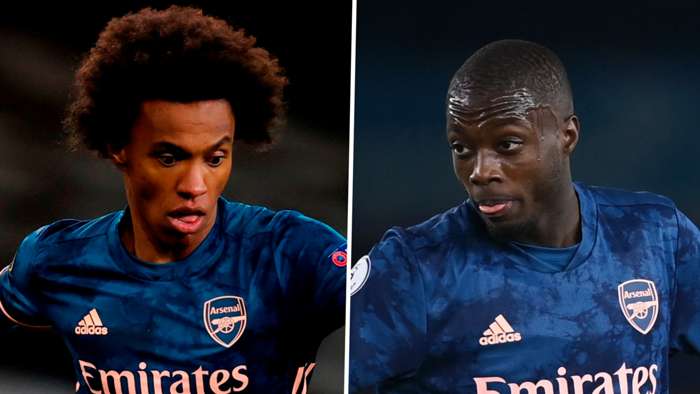 Mikel Arteta may have rid Arsenal of a Mesut Ozil-shaped distraction but Willian and Nicolas Pepe are set to present the Gunners with similar problems, says Alan Smith.

Ozil, after seven-and-a-half years in north London, has taken his mercurial talent to Fenerbahce.

The hope is that Arsenal can now realign their focus and start bringing the best out of those who do have a part to play in their long-term future.

There are, however, still a number of issues for Arteta to address, with the form of misfiring Willian and Pepe sitting towards the top of an unfortunate to-do list.

Former Arsenal striker Smith has told Stadium Astro of a Brazilian forward who was considered to be quite a coup when being snapped up from Chelsea in the summer of 2020: “Being 32 isn’t the deciding factor for Willian – look at Thiago Silva at Chelsea at 36, he’s one of their best players.

“It’s not about age, he’s fit enough, it’s not that he can’t run as he still has that little burst of acceleration. It all comes down to attitude.

“If the approach isn’t right and he hasn’t got that hunger, then you aren’t going to get a performance out of him. This is something for Arteta. Can he work with him on the training ground?”

Smith added: “At Chelsea he was a goal threat week in, week out and we are not seeing that.

“This is what Arteta felt he was investing in when he brought him into the club. At the moment it is blowing up in his face, which is the last thing he needed.

“He’s worked hard to get Ozil out of the club, but he will turn to Willian and Pepe now to get more out of these players.”

Ivorian winger Pepe is another to have struggled to produce his best for the Gunners, with a club-record £72 million ($98m) transfer fee invested in his potential back in 2019.

Smith said of the 25-year-old, who is doing little to justify regular game time at present: “He’s in his second season now, it’s not like he is still adjusting to a new country and a new league.

“He’s one of those players that can produce a bit of magic but on other occasions his football intelligence looks short.

“It’s not as if he had been tearing up trees for a long period back in France. You can throw the size of the transfer fee at him, that’s not his fault and nothing to do with him, but the fact remains that he’s a big signing and they spent a lot of money on him so they will hope he can come good.

“If they were to sell him now, they are going to make a huge loss. That’s another problem.”