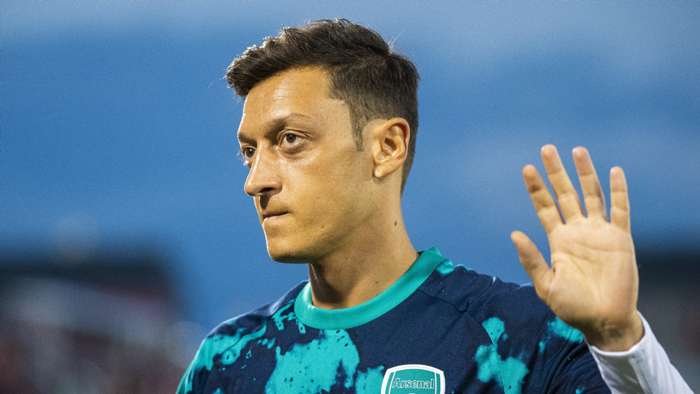 Mesut Ozil named only one former Arsenal team-mate in his 'dream XI', with the majority of the line-up made up of stars he played alongside at Real Madrid.

The 31-year-old took part in a Twitter Q&A with fans on Wednesday, and was quizzed on who he would field if given free rein.

The former Germany international unsurprisingly named a team full of former Blancos team-mates, with eight of the 11 players having played alongside him in the Spanish capital.

Two of the other players, Jerome Boateng andPhilipp Lahm, were long-time team-mates with the Germannational team while just one player, Santi Cazorla, played with him at Arsenal.

Iker Casillas was Ozil's selected goalkeeper, with Boateng, Lahm, Sergio Ramos and Marcelo joining them in the back line.

In midfield, Cazorla and Xabi Alonso were the holding duo, with ex-Real Madrid trio Cristiano Ronaldo, Kaka and Angel Di Maria further up the pitch.

Ozil spent four seasons with Madrid between 2010 and 2013, winning La Liga and the Copa del Rey one time each.

When quizzed on the best memory of his time in the Spanish capital, Ozil replied: "The titles we've won there as a team."

After his time in Madrid, Ozil made the move to north London in 2013 and has spent seven seasons with the Gunners.

His time at Arsenal has been filled with ups and downs, with Ozil helping his side win the FA Cup three times. Lately though, the playmaker has found himself frozen out of the team as his contract enters its final season.

That contract has been subject to plenty of discussion, with the former Germany international currently on a massive £350,000-per-week salary.

Though Arsenal reportedly have tried to offload Ozil and his huge wages, they have been unable to find a suitor and Ozil has declared his intention to see out his deal to its conclusion.