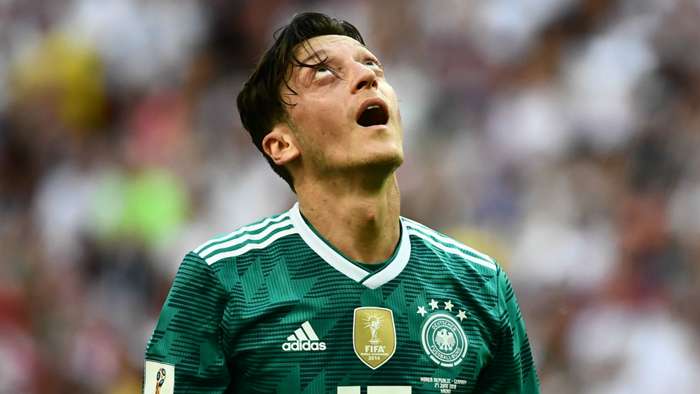 Mesut Ozil has ruled out a return to the German national team, while insisting that he has no plans for a Bundesliga homecoming in the future.

The midfielder played a key role inDie Mannschaft's run to glory at the 2014 finals in Brazil, but was unable to help Joachim Low's side defend their title four years later in Russia.

Germany were eliminated in the group stages, and Ozil subsequently announced his retirement frominternational football, citing racism as the main reason behind his decision.

The 32-year-old, who has ancestral roots in Turkey, was heavily criticised for meeting with the country's presidentRecep Tayyip Erdogan before the World Cup, but he strongly denied any wrongdoing.

It has been suggested that Ozil could perform a U-turn after leaving Arsenal to join Fenerbahce, where he is likely to enjoy a prominent role in the first team again after being frozen out by Mikel Arteta during his final year at Emirates Stadium.

However, the experienced playmaker insisted during his signing ceremony at Sukru Saracoglu Stadium on Wednesday that he will never play for Germany again.

"If I go on a road, I will never come back. So I will not play in the German National Team anymore. I wish them success," said Ozil.

He also ruled out the possibility of returning to the Bundesliga before he hangs up his boots, having enjoyed spells at Schalke and Werder Bremen in the early stages of his career.

Asked if he has dreamt of going back to the German top-flight at some point, Ozil replied curtly: "No, I haven't."

The former Arsenal star added on how he will deal with the weight of expectations at Fenerbahce:"There is always pressure on a football player. I always played in big clubs, and there was always pressure.

"Fenerbahce is also a big club and I know there will be pressure here. This is a club I love very much. I will do my best. I hope everything will be fine.

"Ican't give a date about when to play but I want to play as soon as possible."