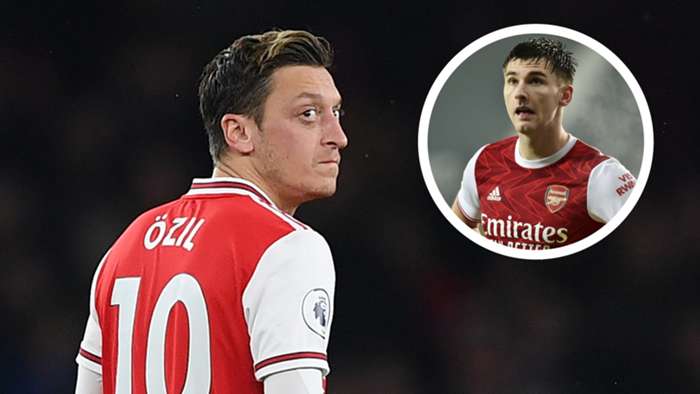 Mesut Ozil could have been the “the best player ever to play for Arsenal” if he had the determination of Kieran Tierney, says Martin Keown, but a divisive figure at Emirates Stadium is considered to have been “conning” supporters across his time in England.

Inconsistency has, however, proved to be a problem, with Arsene Wenger, Unai Emery and Mikel Arteta struggling to bring the best out of the talented playmaker on a regular basis.

The latter, who has the reins at present, has taken to freezing Ozil out of his plans in 2020-21.

That has the former Germany international heading for the exits, as his lucrative contract continues to run down towards free agency, and Keown says a player snapped up from Real Madrid in 2013 will leave with his potential unfulfilled.

The former ex-Gunners defender told talkSPORT: “It hurts me that a player of that talent can’t get on the football pitch, it’s a crying shame.

“For me, he doesn’t go down as a legend, because he doesn’t match the energy and determination of legends that I’ve seen at that football club.

“If he had Tierney’s determination, coupled with that ability, he might’ve gone down as the best playereverto play for Arsenal.

“He’s become calculated in the way that he’s undermining the club with tweets, and I think it’s now time to go.”

Keown added on Ozil, having been critical of the 32-year-old throughout a seven-year stint at Arsenal: “Two-and-a-half years ago when Atletico Madrid knocked Arsenal out of the Europa League, I watched very closely and it felt like he was conning the fans.

“He wasn’t giving everything for the shirt; I accused him of crocodile tears, it felt like something was very wrong. That was two-and-a-half years ago, and my opinion hasn’t changed.

“There was a session of illnesses, a mystery back injury, away games he wasn’t available.

“Is there a problem with the player? Is he conning us? Eventually he’ll write a book and we’ll get to know the whole story.

“But if you’ve got that much talent and you’re not getting picked, you can’t be giving 100 per cent, and that was happening two-and-a-half years ago.

“He agent Dr Erkut Sogut accused me of jealousy and not being worthy; I think the 449 games for Arsenal qualify me, I’m not sure how many the agent has played.

“My eyes don’t lie. Statistics tell you an amazing story about Ozil, which I don’t think is convincing.”