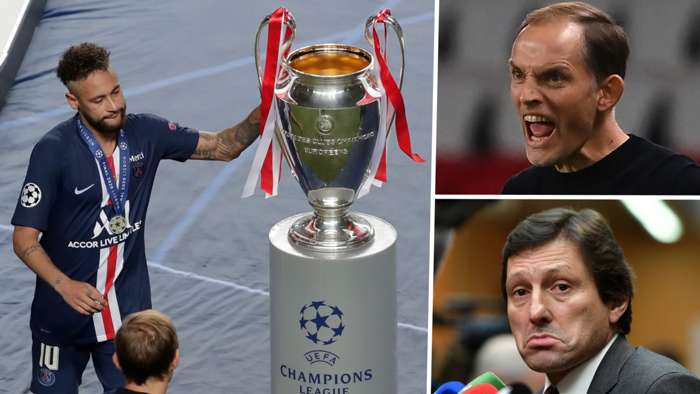 After reaching a first Champions League final and running Bayern Munich close in a 1-0 defeat, Paris Saint-Germain seemed to have taken a significant step towards conquering Europe and achieving the status they crave after eight years of QSI ownership.

There are burning issues at Parc des Princes to be resolved, including the futures of star duo Kylian Mbappe and Neymar, both of whom are susceptible to leaving next summer due to their precarious contract situations.

Brazil star Neymararrived at PSG in order to write his name into their history by leading them to the Champions League. He may only have 12 months left to do so, having been so tearfully close in August.

Head coach Thomas Tuchel might have felt that having overseen progress to within a step of the European Cup, he deserved to be treated to an enhanced squad. Instead, what he has to work with on the eve of the club’s opening Champions League fixture of the 2020-21 season against Manchester United is a hastily assembled group that saw three of the four new faces arrive with mere hours left of the transfer window remaining.

“It’s a good thing it’s over,” he sighed before Friday’s 4-0 win over Nimes. “Now we can start working.”

Since Lisbon, PSG have sashayed through a delicate minefield of problems, from the coronavirus crisis that left the squad depleted to the miserable start to the season that saw them suffer 1-0 defeats to Lens and Marseille before turning things around with a hard-fought win in Metz.

The common theme of their troubles, though, has been the relationship between coach and sporting director, Leonardo.

Tension between the pair is nothing new. Tuchel was unhappy with the handling of out-of-contract club stalwarts Thiago Silva and Edinson Cavani, the latter of whom was unceremoniously dumped when hisdeal expired at the end of June, depriving the club's all-time top goalscorerof the opportunity to help the club’s Champions League push.

“We lose too many players for nothing,” he would say icily, having seen five depart under freedom of transfer rules in the summer, a fact, he was quick to point out, handicaps the club when it comes to paying big money for signings.

Throughout the transfer window, the former Borussia Dortmund boss was left unimpressed with his side’s pursuit of a defensive midfielder, a position that Tuchel did not believe needed upgrading, and their slow progress in a capturing reinforcements in areas he thought to be essential.

“For the moment, we do not have the same quality. If we stay like this, with this reduced squad, we cannot expect to have the same objectives,” he grumbled in September, demanding the club add “an attacker, a central defender and a midfielder” to his ranks.

He would ultimately get two of his three wishes in the form of Moise Kean and Rafinha, with Danilo Pereira thrown in to boot, but not until the very end of the window.

Conversely, Leonardo has been at odds with the coach over the number of days off given to the squad and, of course, his outspoken criticism of the overall project.

If the tension continues to simmer to such a degree that Tuchel’s best insurance against being sacked over the course of the season is the fact that the club do not wish to pay off the rest of his contract, he has moved to cool matters in recent days.

“I gave my opinion on our situation,” Tuchel said last week. “In football, I never take things personally. It’s like that, we had no contact afterward. I gave my opinion because I think it’s my job as a coach. Leonardo gave his opinion and now things are clear. Now we can move on. For me, it’s not personal.”

And just as the pair must move on, so too must the club and the team. PSG’s challenge this season is undoubtedly greater than it was last – but it is one that everyone must rise to if their ultimate goal is to be realised.