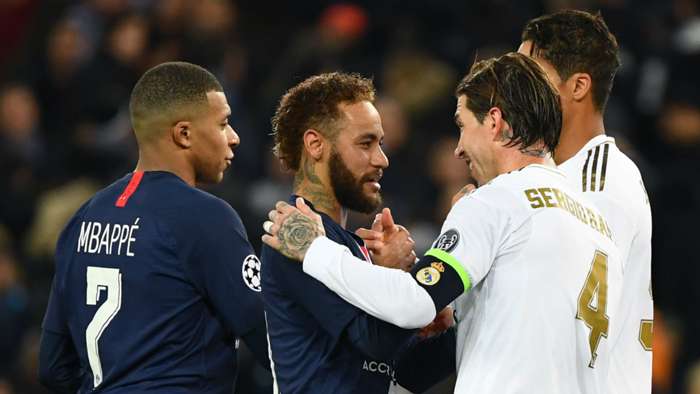 Paris Saint-Germain are prioritising contract extensions for Kylian Mbappe and Neymar amid rumours of a possible transfer swoop for Real Madrid's Sergio Ramos.

The 34-year-old will be free to speak with any potential suitors in January, and PSG are reportedly leading the race for his services.

Goal has reported thatRamos is eager to commit to Madrid through to 2023 while remaining on his current salary, but the two parties have yet to reach a final agreement.

It has been suggested that PSG are willing to offer the veteran centre-back more lucrative terms at Parc des Princes, and he has added fuel to the ongoing speculation surrounding his future by withdrawing from a press conference while away on international duty with Spain on Monday.

Manchester City midfielder Rodri will address the media alongside Spain head coach Luis Enrique instead of Ramos ahead of this week's Nations League clash with Germany, which will effectively decide who wins League A , Group 4.

Despite intensifying talkof Ramos approaching the end of his time at the Bernabeu, Goal has learned that PSG are more focused on tying Mbappe and Neymar down to fresh terms than on bringing in any new players in the winter transfer window.

The two men are due to drop into the free agency pool in 2022, however, the French champions are determined to ensure that the prized duo remain at Parc des Princes well beyond that.

Mbappe has beenlinked with Madrid and Neymar wastipped to force through a return to Barcelona at the start of the year, but both players have insisted that they are happy in their current surroundings in more recent times.

PSG are also planning to take a far more conservative approach in the transfer market due to the ongoing financial constraints caused by the coronavirus pandemic, with matchday revenue still very low as stadiums in France continue to operate with a reduced capacity.