'Pass the ball to Messi!' - Alves' advice for Dest as he backs USMNT star to shine at Barca 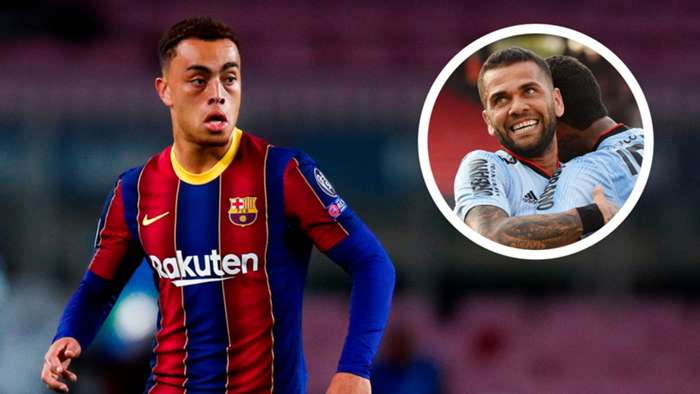 Dani Alves has offered new Barcelona defenderSergino Dest some simple advice, telling the U.S. men's national team star to simply pass the ball to Lionel Messi whenever he can.

The former Ajax star is yet to be involved in any goals across his first nine appearances for Barcelona but has shown plenty of promise as an attacking fullback.

Alves, who chipped in with an impressive 101 assists while at Camp Nou, likes what he's seeing from Dest early on and told the American to make the most of his star Argentine team-mate.

"If I have to give Dest advice, it's very simple: pass the ball to Messi," Alves told RAC 1.

“Sergino Dest has a lot of quality and has a chance of succeeding at Barca, but I don't like to make comparisons.It happened to me with Cafu...they don't make sense."

Dest will no doubt take Alves' advice to heart with the USMNT defender recently revealing his affection for the current Sao Paulo right-back.

"Dani Alves is my role model, he plays in the same position and I have seen many YouTube videos of him and I have learned a lot," Dest said in October.

"His teammates are here, at Barcelona, ​​and I can ask them for advice. I want to be a player similar to him."

While Alves is clearly keeping a close eye on Dest, the Brazilian appears to besomewhat bitter that he wasn't given a chance to re-sign for the Catalans.

"I offered myself to Barca to come back. I went to Juve to prove I was still at a good level," Alves told RAC 1.

"I wanted to return to Barca and they needed me,but they didn't have the balls to admit that they were wrong with me. If they had treated me as I thought I deserved, today I would still continue playing for Barca.I love this club.