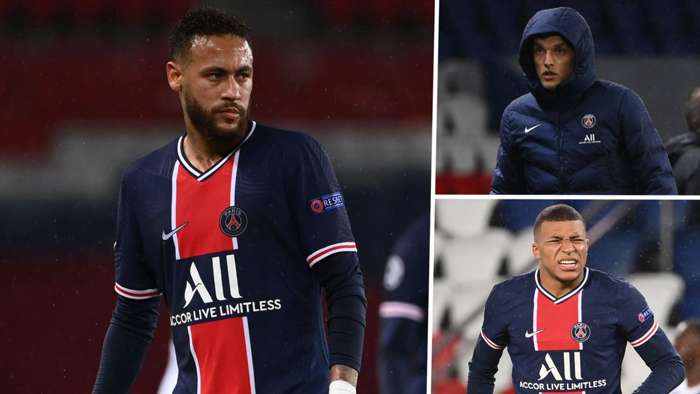 Just 58 days after running Bayern Munich close in the 2019-20 final, PSG instantly find themselves under threat of missing out on the last 16 entirely after a display that ranks among their poorest of the past decade.

In Lisbon, where the 'Final 8' was dramatically played out in August, the Parisians looked a united group, with even the defensive contribution of the notoriously work-shy Neymar catching the eye.

Back home two months later, there was no hint of that togetherness, as Tuchel deployed his side in such a way that he was reliant on Kylian Mbappe, Neymar or Angel Di Maria producing a moment of brilliance to unpick the packed but patchwork zebra-striped defence facing them.

With players of such quality, of course, there were moment of brilliance, notably when Mbappe danced into space in the box early in the second half only to see a fierce effort bound for the far corner turned wide by David de Gea, yet the home side's gifted attackers were all too readily contained in a display barren of imagination and spirit.

PSG’s reliance on the trio – and particularly Mbappe and Neymar – was made painfully clear in Paris.

Given their improved work rate in Lisbon, it might be unfair to suggest that this performance was coming, but the facts underline that the two most expensive players of all time are presently struggling to deliver in Europe.

Mbappe is on a six-game scoring drought in the Champions League, having never previously gone more than two without a goal (aside from a trio of substitute appearances amassing to just 25 minutes when he was just 17), while Neymar has not registered in four– the Brazilian's worst sequence since his debut season in Barcelona.

Throw in that Di Maria had been inactive for close to four weeks due to suspension, and it is all the more puzzling that Tuchel was happy to effectively leave the trio to it while packing his midfield with three defensively minded players who were always unlikely to offer the type of craft or dynamism to break down Ole Gunnar Solskjaer’s well-organised ranks.

It was a sharp contrast to the dexterity Bruno Fernandes displayed, and even the thrust that Paul Pogba showed off the bench in terms of his ability to get forward and support the attack. PSG had neither the guile nor the energy to replicate that dynamism.

With Layvin Kurzawa, another rusty after a long ban, and Alessandro Florenzi unable to offer a threat down the flanks, the front three were left to themselves to effectively battle against five, six or even seven opponents.

United might have left their forward players to perform a similar task, but their execution of the tactic was far sharper. Rather than plodding in the midfield, they bypassed that area entirely and, with the pace and directness of Anthony Martial and Marcus Rashford in attack, were able to exploit the vast spaces that PSG’s own makeshift defence left in behind.

The poor protection of the midfield offers some excuse but does why explain why they were regularly outnumbered on counters.

The hosts were strangely devoid of urgency and were also made to pay for a clear lack of potential game-changers on the bench.

Granted, there was a purple patch after Moise Kean came on for the ineffective Idrissa Gueye during the interval, but the on-loan Everton forward, to put it kindly, is still finding his feet in his new surroundings.

In short, there were no positives for PSG to take out of this match. Defensively, they were misshapen, in midfield they were ineffective, while in attack they were asphyxiated.

Overall, they were both out-thought and out-fought. As captain for the night Presnel Kimpembe admitted afterwards, "I've no explanation; we just weren’t good."

Tuchel’s position as coach was already known to be fragile and such a performance has done little for his credibility, despite an improved domestic run after two defeats to open the Ligue 1 campaign.

With trips to Istanbul Basaksehir and RB Leipzig to come in the next fortnight, PSG need to quickly rekindle their Lisbon spirit for the tough tests that lie in wait.