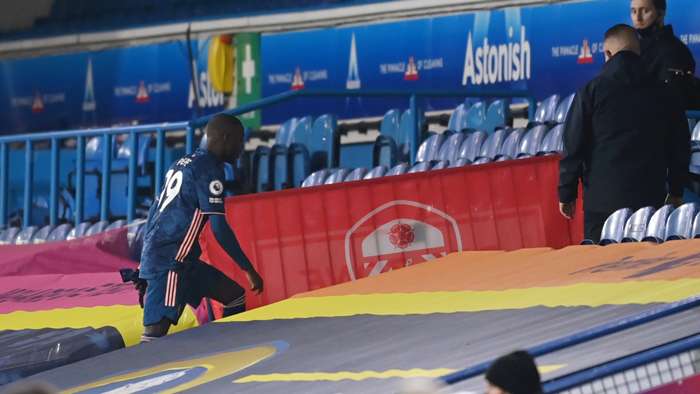 Arsenal head coach Mikel Arteta has insisted there are no excuses for Nicolas Pepe’s red card, and accused the forward of letting his team-mates down.

The Ivory Coast international was shown a straight red card by referee Anthony Taylor for a headbutt on Ezgjan Alioski.

The contact was minimal, and Alioski made the most of it, but Pepe gave the official a decision to make.

Arsenal fans made their feelings known on Twitter, with some describing him as "brain dead"and that would appear to be a view shared by Arteta who looked decidedly unhappy with his player during his post-game interview with Sky Sports.

Arteta concluded his interview by saying Pepe had left his team-mates in the lurch.

“I really like the personality of the team,” Arteta said. “When Pepe let the team down, how we suffered together and stuck to what we had to do.”

Reflecting on his side’s performance, Arteta felt a point was acceptable given the Gunners played the majority of the second half with 10 men.

“Considering how we got Pepe sent off, a draw is okay,” he said. “I never like playing for a draw, but in the circumstances a point is okay.

”In the first 30 minutes we were more dominant and created a lot of issues. But then the game broke a bit and we gave the ball away in difficult areas.

“We suffered and in the second half we were early with 10 men and it was a matter of defending well and staying patient, and using the pace of our players and the spaces they were leaving.”

Bukayo Saka had a big chance to win the game for Arsenal when getting beyond the Leeds defence, but he was thwarted by a fine save from Illan Meslier.