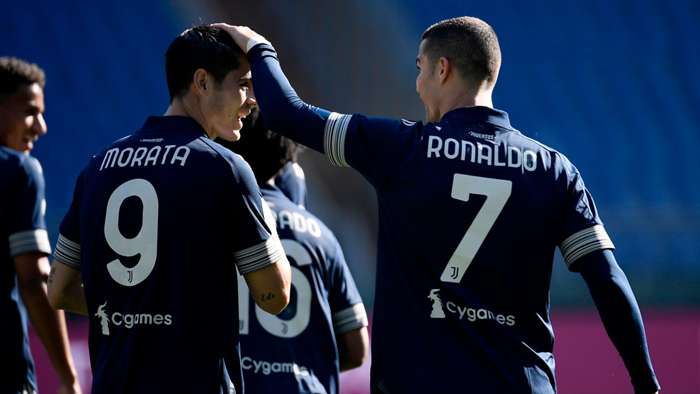 Andrea Pirlo hopes he now knows his best Juventus XI and does not need to experiment further as the Bianconeri look to kickstart their Serie A title defence.

Issues with injuries and positive coronavirus tests have forced Pirlo to shuffle his pack, but he now appears to have settled on a system that relies heavily on a forward pairing of Cristiano Ronaldo and Alvaro Morata.

Morata returned to Turin at the start of the season and has taken Paulo Dybala's place in the side, with the duo yet to play a single minute in Serie A together alongside Ronaldo.

Juve have not won when picking six-goal Ronaldo and Morata from the start, drawing with both Roma and Lazio, but the Portuguese's Covid-19 diagnosis set Pirlo's men back.

The coach certainly appears to have seen enough, surely encouraged by the 4-1 win at Spezia where Morata opened the scoring before the returning Ronaldo arrived from the bench to inspire victory with a brace - the first created by his strike partner.

"I hope the experiments are over," Pirlo told Juventus TV. "I have had the opportunity to work with players who are super willing to talk and make some technical, tactical changes, so I'm satisfied with this.

"Depending on the matches, maybe something will change, but let's first give an energetic impression and then maybe we will change something."

The forward, on loan from boyhood club Atletico Madrid, opened the scoring with one of his four efforts and then ran the visiting defence ragged, contesting 14 duels and winning four fouls - highs among all players.

"He is a great player," Pirlo said of Morata. "We took him for this reason. We knew of his quality; now he has also found the confidence and continuity he had lacked in recent years.

"We know his value and we hold him tight and givehim what he needs."

Juve host Cagliari on Saturday and have both Matthijs de Ligt and Alex Sandro back fit, although the latter is likely to start from the bench.

Pirlo hopes his side can build on the 1-1 draw at Lazio prior to the international break when Felipe Caicedo's 95th-minute equaliser cost them two points.

"We played a good game - it's a pity we didn't close it," he said. "It is important to settle games early.