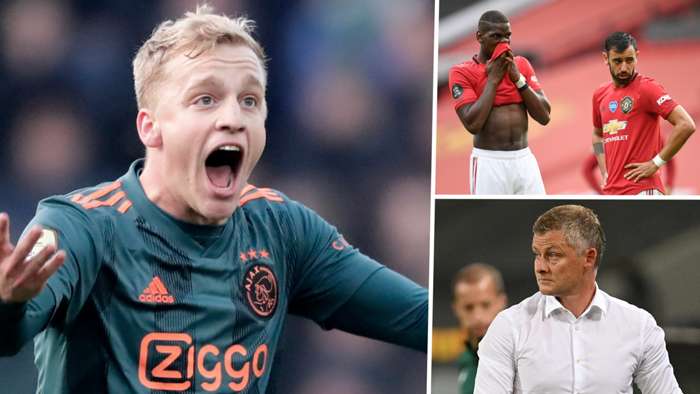 It may have taken until the start of September, but Manchester United have finally secured their first senior signing of the summer.

With Real Madrid and Barcelona having previously shown a keeninterest in Van de Beek, his signing is being seen by many United fans as something of a coup.

There are questions, however, regarding quite where he fits into Ole Gunnar Solskjaer's team given the midfielders who are already at the club and the 23-year-old's main strengths.

United's surge towards a third-placed finish in the Premier League last season was built on consistency of selection, with Solskjaer benefitting from a fully fit squad to secure Champions League qualification.

Paul Pogba and Bruno Fernandes were given the opportunity to begin building an encouraging relationship at the heart of the team's midfield, safe in the knowledge that the more defensively-minded Nemanja Matic was able to protect the backline behind them.

Given that, there are some who believe Van de Beek is being brought in as a squad option who can rotate in and out ahead of what promises to be a relentless campaign, with a view to him potentially becoming a regular starter should Pogba's urge to leave the club return in the next 12-18months.

But given the price tag, it is fair to presume that Solskjaer does have more than just a bench role in mind for his latest new signing. So where would Van de Beek fit into the current United line-up?

Solskjaer has largely favoured a 4-3-3 formation during his time in charge at United, and if that is to continue then it would seem that Van de Beek is being lined up to step in for Matic in a holding midfield role.

Given he contributed 10 goals and 11 assists all competitions during his final season at Ajax, that would seemingly limit his potential output in the final third.

It does, however, mean that Pogba and Fernandes can continue to play the same roles they shone in during the final weeks of the 2019-20 campaign.

Given his age, there is nothing to suggest that Van de Beek could not adapt to playing such a role.

He made more successful tackles per 90 minutes last season (2.2) than either Pogba (1.5) or Fernandes (1.7), and while his inclusion in a deeper role would give United's midfield a very attacking outlook, they are - in theory - likely to be on the front foot in the majority of the league matches they play in the upcoming season.

If that is not how Solskjaer chooses to use Van de Beek, then fans could see him revert to a system he used sporadically over the course of the last campaign.

When facing some of the league's most prolific attacks Solskjaer opted to deploy three centre-backs, with Luke Shaw tucking in alongside Victor Lindelof and Harry Maguire.

Playing such a system could in turn see Van de Beek and Pogba act as traditional midfield pairing, with Fernandes deployed as a No.10 behind split strikers.

Such a formation would allow Van de Beek increased opportunities in attack, though that would also bring with it additional defensive responsibilities for Pogba, for whom sitting in front of a defence is not a strength.

It would also mean no place in the starting line-up for at least one of United's attackers.

Right now that would likely be Mason Greenwood who misses out, but should Jadon Sancho arrive before the transfer deadline then the decision facing Solskjaer would be much more difficult given the presence of Anthony Martial and Marcus Rashford.

The solution to Solskjaer's conundrum could well be to revert to a system that has gradually been phased out of the game over the past five years.

During the 2000s, the 4-2-3-1 formation was a staple of almost every successful European side, but in recent times it has fallen out of fashion, with top coaches negating the need for a traditional No.10 by playing wingers who can create and score goals in equal measure.

The make-up of United's current squad, however, could see them favour that approach as it would allow Fernandes the freedom to roam in the final third while also allowing allowing Solskjaer to select three forwards.

There would still be defensive responsibilities for either Van de Beek or Pogba to undertake, but with more traditional full-backs in place rather than wing-backs, there should be enough cover for at least one of the two midfielders to roam forwards at any one time.

It remains to be seen whether that is the way Solskjaer chooses to go or if Van de Beek truly is just a rotation player for now.