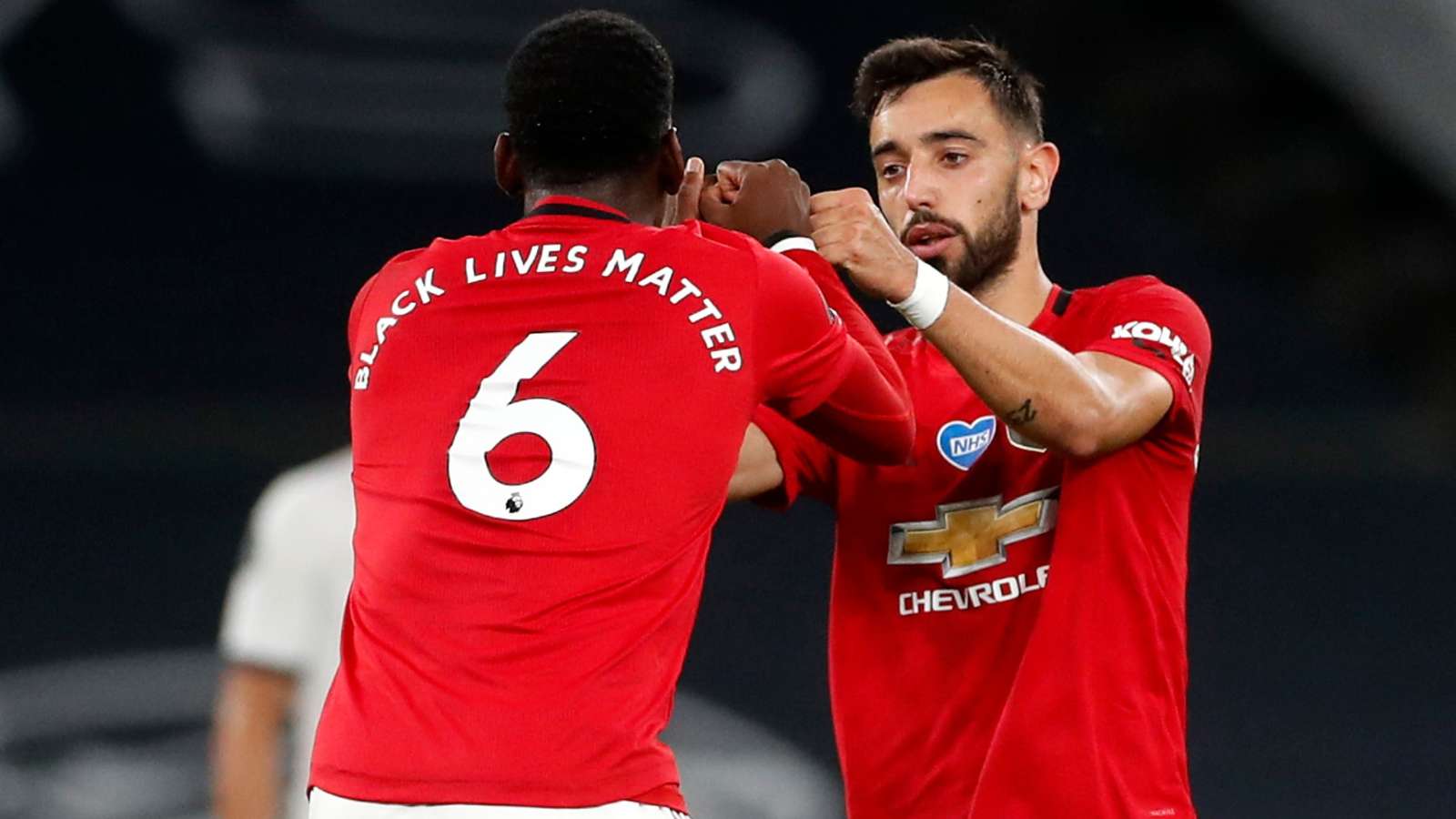 The Premier League is back after the coronavirus-enforced shutdown.

While little changes were made at the top of the table - with Liverpool inching ever closer to a first league title in 30 years courtesy of a 0-0 draw at Everton - further down there were significant results.

Arsenal's already-slim top-four hopes look dead in the water after yet another defeat, this time at Brighton. Meanwhile, Manchester United now look dependent on the outcome of Manchester City's Court of Arbitration for Sport appeal to stand any chance of making next season's Champions League.

Chelsea impressed in their come-from-behind victory over Aston Villa while there were also good wins for Newcastle, Wolves and Southampton.

But what were the main tactical lessons from the first round of games?Goaltakes a look....

As soon as Paul Pogba came onto the pitch at the Tottenham Hotspur Stadium, ManchesterUnited went up a notch.

His presence in midfield seemed to scare Spurs into territorial retreat, while his interactions with Bruno Fernandes eventually forced Jose Mourinho to switch to a narrow 4-2-2-2, with four midfielders looking to squeeze United’s two most creative players out of the game.

It was the perfect example of why, and when, Pogba and Fernandes can play together in the United midfield.

Certainly there are times when Ole Gunnar Solskjaer will need Fred and Scott McTominay in central midfield, but United’s biggest difficulty this season has been converting possession into chances;a side-effect of the manager’s focus on pace over craft, on direct counters over lock-picking.

When faced with a deep defensive block, such as the Spurs shape on Friday, they need at least two creative midfielders to produce a final ball. Modern football is more territorial than at any point in its history, a reflection of the ever-widening financial disparity between the top clubs and the rest. When United hold 65 per centpossession, they need to pack the team with pure creators.

Pogba and Fernandes can, and will, play together regularly in an improved United midfield.

Arsenal fans were left deflated when Brighton capitalised on familiar defensive issues to secure a much-needed victory in the Seagulls' battle against relegation.

Mikel Arteta’s move to a back five for the last few minutes left big patches of grass open in front of the wing-backs, leading directly to the Brighton winner.

However, there was plenty in the tactical complexity of Arsenal’s performance to indicate Arteta has used the mini pre-season wisely and his team – despite results - are on track.

They couldhave been 3-0 up by half-time thanks to the sophistication of their shape-shifting formation. Nominally a 4-5-1 with Bukayo Saka in central midfield and Pierre-Emerick Aubameyang on the left, when in possession Arsenal’s players interchanged positions to form something more like a 3-2-2-3.

Hector Bellerin drifted into central midfield to form a two with Matteo Guendouzi while Sead Kolasinac tucked infield to make a back three, giving the Gunners a solid five-man foundation.

The remaining five moved in sync to cover the width and depth of the pitch. Saka drifted out to the left as Aubayemang made diagonal runs infield; Dani Ceballos dropped into a right-hand number 10 position as Nicolas Pepe hugged the right touchline; and Alexandre Lacazette replaced Ceballos in midfield if required.

The final result skewedperceptions of the game, but for the first hour at the Amex Stadium, Arsenal were unmarkable, untrackable, and unplayable, adapting their individual roles to ensure every pocket of space was occupied. After a couple of transfer windows, Arsenal will be a real force.

Jose Mourinho’s first few months as Tottenham manager were bizarrely high-scoring and appeared to contradict everything we knew about the Portuguese.

It was perhaps to be expected given his genius tends to flourish during pre-season preparation. But finally, after a few weeks of tactical training, Tottenham look like a Mourinho team.

Spurs were ruthlessly drilled, sitting right off Manchester United in the kind of ultra-compressed mid-block we have become used to seeing from Mourinho teams down the years.

The wingers worked tirelessly to support their full-backs, all 10 outfield players shuttled across as a unit to remain compact, and – most Mourinho-like of all – they had a clear reactive battle plan to negate the opposition’s main strength.

The midfield five and Harry Kane formed a narrow pentagon as United’s defenders held the ball, with Heung-min Son and Steven Bergwijn enclosing Fred, Scott McTominay, and Bruno Fernandes within that shape.

It forced United to become sluggish, passing aimlessly around the pentagon and into wide areas that were easily shut down. Mourinho had negated United’s pace in behind as well as Fernandes’s creativity.

Spurs were ultimately undermined by nervousness – or perhaps tiredness – as their defensive block dropped too deep, inviting pressure and the sort of clumsy penalty concession that speaks to fragile confidence.

Like Arteta, Mourinho needs a transfer window to sweep away the emotional issues that pre-date his appointment.

In the end, it was simple football that won Chelsea the three points against a hopelessly defensive and lifeless Aston Villa.

The visitors pummelled Dean Smith’s side with crosses throughout the match, and as Villa’s wingers tired, Cesar Azpilicueta found more and more space to pick out his man, eventually providing for Christian Pulisic.

Olivier Giroud's winner, two minutes later, was defined by Villa’s physical and emotional exhaustion, rather than anything particularly tactical.

Before that, the most noteworthy aspect of Chelsea’s return to action was Ruben Loftus-Cheek’s deployment as a left winger.

The 22-year-old spent the first half constantly dropping deep to collect the ball, directly swapping positions with Mason Mount. This put Chelsea’s creative hub in the left half-space and allowed Loftus-Cheek to dictate the tempo, and while both players looked rusty – giving Villa a 1-0 lead at the break – it hinted at something interesting.

Next season, when Timo Werner, Hakim Ziyech, Christian Pulisic, and perhaps Kai Havertz are buzzing around the front line, Frank Lampard’s new desire to see his wide forwards drift dramatically from their base position, swapping place with midfielders, could confuse and distract deep-lying defences like Villa’s.

For now, the quality is not quite there to turn positional freedom into chances – but it soon will be.

It will have surprised many onlookers to see Newcastletear through Sheffield United on Sunday and Southampton finally embody Ralph Hasenhuttl’s counter-pressing tactics in a destruction of Norwich City on Friday.

But both results make a lot more sense when one considers the impact of a three-month break, followed by a too-short pre-season, is having on player fitness.

There is a lot of rustiness in the legs, and with two games a week that will notchange any time soon.

Between those two matches, Adama Traore completed four dribbles in just 26 minutes at West Ham to win Wolves the points.

Pace and direct dribbling will be crucial commodities in the coming weeks, particularly off the bench.