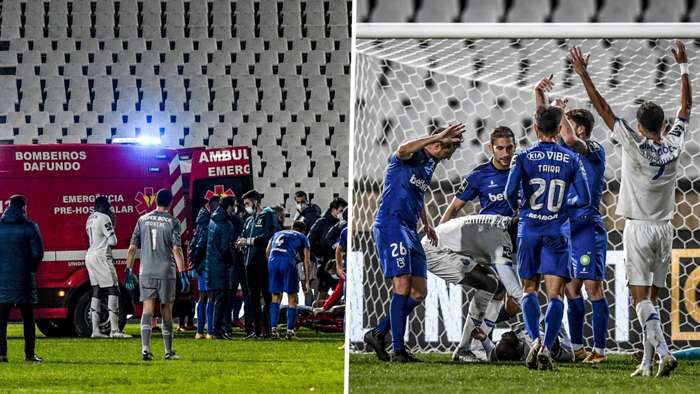 Porto players were left in tears on the pitch after right-back Nanu was knocked unconscious in a horrific collision in his side’s 0-0 draw at Belenenses on Thursday.

Both sets of players were visibly distressed at Nanu’s condition, with some crying and saying prayers as the game was stopped for more than 10 minutes. He was taken to the Sao Francisco Xavier Hospital in Lisbon after receiving treatment on the field.

Former Real Madrid defender Pepe was seen in tears on the pitch but told reporters after full-time that the doctors had reassured him that his team-mate had regained consciousness.

“I wish our team-mate Nanu a speedy recovery,” Pepe said. “The doctors in the ambulance told me that he was doing well, that he was already conscious.”

Porto have since provided an update on his condition: “Nanu had a cerebral concussion and spinal cord injury with loss of memory. At this moment he is stable, conscious and is already oriented in time and space.

“The examinations performed at Hospital S. Francisco Xavier did not reveal any alterations of clinical severity. He will continue to be observed at the hospital.”

Porto manager Sergio Conceicao raged after the match at the state of the Belenenses pitch and the decision not to give Porto a penalty for the collision which left his defender hospitalised.

“I have no news on Nanu yet,” the coach told reporters. “I know he’s in the hospital. I think he had recovered a little bit of consciousness. Now let's see, let's see. The doctor will talk about it later.

“But it’s not just that. Honestly, there are things I don't understand. Playing on this pitch, for those who attack, is more difficult. It is easier to defend than to attack here.

“I don't know how they have matches with this quality of pitch. And then there is the possibility of more injuries. It's incredible.

“A referee who has just been in a controversy and the Arbitration Council puts him here. It is revolting. We are disgusted.

“And this is a penalty everywhere! Is it involuntary? Well, who gives away a penalty voluntarily? We were cheated today, we were robbed.”