Press: I chose to wear No.24 at Man Utd as a nod to Kobe Bryant 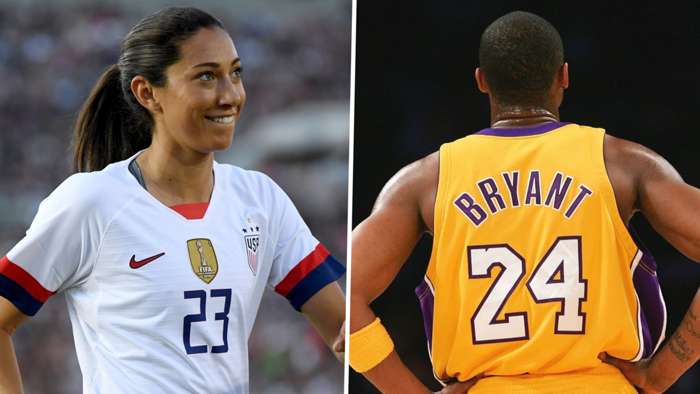 In the end, that number was taken by fellow summer signing Alessia Russo, with Press therefore choosing to wear No.24 as a tribute to Bryant, who died tragically earlier this year in a helicopter accident.

“I'm not someone that holds too much luck or significance to a number, but when I wasn't able to wear my normal number, I definitely chose this with a little nod to Kobe,” the 31-year-old, who is from the Los Angeles area that Bryant became adored in during a 20-year career with the LA Lakers, said.

“I'm an LA girl and grew up when everyone, everywhere we went, they were crazy for Kobe.

“The amount of inspiration and joy that he gave people by the way he played with his passion is amazing. It's something that, as athletes, we're all striving to do.”

Press herself has been a key part of one of the defining teams in women’s football history, winning back-to-back World Cup titles with the United States in 2015 and 2019.

She joins Manchester United along with USWNT team-mate Tobin Heath, both of whom are signings that show the ambition at the club and their desire to win trophies, despite them being in just their second season in the Women’s Super League.

“I think what we'll be able to bring is just a relentless mindset towards that, and to never question or doubt if that's why we're here and if that's the team's purpose. I think that's a big thing.

“I think also just being a professional for a really long time, you get really smart with what you need to do to be successful individually and I do think that younger players have to learn that, so hopefully we can be helpful in in that.

“I think the mixing of cultures is super interesting on both sides. There'll be a lot that we get to learn from coming over here and experiencing a different brand of football, and a different culture of people, and vice versa.

“What I hope to bring is a competitive nature, drive, a hard-work ethic and striving for excellence, in all that I do.”

It isn’t the first time Press has played abroad. The former Utah Royals forward has enjoyed three separate stints in Sweden in her career, reaching the 2013-14 Women’s Champions League final while part of a Tyreso side that also included Brazilian icon Marta.

Those experiences introduced her to a style of play that’s very different to that of America’s NWSL, preparing her well for this move.

But she recognises that there will be a unique experience to enjoy in England too.

“I think, tactically, teams are more organised and create more of a fortress. In the NWSL, it's a very transitional, very high-paced game and it's very direct,” she explained.

“I expect, which I also experienced in Sweden, just more tactical sophistication and build-up play.

“The history that goes into putting on this crest is something that I've never experienced. It's something that no club has in the United States, and even the other international teams I’ve played for don't have this type of rich history of football.

“It's a huge honour, and in a lot of ways it feels surreal. I came to Manchester when I was 13 years old when I was playing for a local team.

“We came over and played Manchester United’s development girls’ team. It was the first time I experienced the English Premier League and English football and I was blown away.

“To be back here some decades later, and to be playing, it's an amazing opportunity.