Professor Rangnick is the ideal choice to be next Germany manager 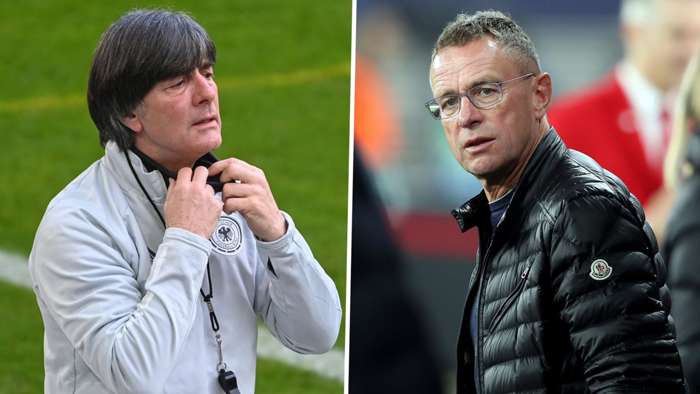 There is no teamas efficient at reaching the World Cup as Germany.

Die Mannschaft have qualified every time they have entered the tournament, losing just two qualifying games in the last 80 years.

As a result, this part of their World Cup campaign usually is a chance to test out new players and tactics and to plan forthe mediumand long term.

This time it is different. Head coach Joachim Low will be in the dugout for the first three games of the campaign, but will be a distant memory by the time the competition proper rolls around in winter 2022.

The man who guided Germany to the 2014 World Cup title has confirmed he is stepping down after the European Championship - delayed until after the start of the World Cup qualifying campaign due to the effects of the coronavirus pandemic.

It leaves Germany in limboas Low will begin this qualifying campaign but not end it.

Low is also using these matches as preparation for the Euros, rather than looking far intothe future, with speculation that veterans Thomas Muller, Jerome Boateng and Mats Hummels may even be brought back from exile to help win the summer tournament.

The coachs upcomingexit isa distraction for a team who are usually so focused, with questions at press conferences honing in as much on his potential successor as on the upcoming matches.

And every time the question of Germanys next manager comes up, one name is always in the conversation: the man who has taught and inspired the current generation of German coaches.

When Jurgen Klopp ruled himself out of the running for the job, he chose Ralf Rangnick as the best candidate for the position.

"RalfRangnickwould do well at the DFB. He would be my first choice," the Liverpool boss told Sky Germany.

The Godfather of Gegenpressing has been a major inspiration to Klopp, Thomas Tuchel, Julian Nagelsmann and the majority of German coaches working at the top level today.

If the German football association, the DFB, wants the right man for the job, why go for the students, when they can have the teacher?

Especially if that teacher has admitted he is ready and willing to take on the position - unless someone else snaps him up first.

"It is a job which matters to everybody," Rangnick told Sky Germany."In general I can imagine many things. It is a question of timing. At the moment I am free. Should the DFB call me once I am not free anymore, itd be too late."

The 62-year-old former head of sport and development at Red Bullspoketo Schalke about becoming their new sporting director as they look to rebuild, which may haveput more pressure on the DFB if he is their number one target.

And if theyhave done their homework, Rangnick should be their number one target.

Despite having only one major honour to his name - the German Cup with Schalke back in 2010-11 - Rangnick is one of the brightest minds in German football.

He was the first coach to bring tactical analysis to the publics attention in the country; hewas actually criticised for it back in 1998 afterhighlighting how he used a back four and zonal marking with his second-division Ulm side.

At the time, Germany was still stuck in its ways, with the majority of clubs using the sweeper system and playing three at the back. Rangnick was mocked and called the professor but he soon taught everyone else a lesson.

His own epiphany came when he was a lower league player and came up againstValeriy Lobanovskyis Dynamo Kiev side, who utilised a pressing system.

"I was convinced they had one more player on the pitch," he recalled. "This was a whole new way of football."

After guiding Ulm to the Bundesliga for the first time ever, he coached Stuttgart in Europe and then helped Hannover win promotion to the top flight.

When Jurgen Klinsmann needed an assistant for the Germany job in 2004, Rangnick was in the running, but lost out to Low.

Instead, he took charge of Schalke, where he finished second in the Bundesliga and reached the DFB-Pokal final. The League Cup trophy was not enough to keep him around and Rangnicks next job was a project, having been brought by software billionaire Dietmar Hopp to manage lowly Hoffenheim.

Back-to-back promotions brought Hoffenheim to the big time and they have been a Bundesliga club ever since.

Another spell at Schalke followed, with the Royal Blues winning the German Cupbut Rangnick quit after less than a year, claiming he needed a break from football.

When Rangnick returned, it was as director of football for bothRB Leipzig and Red Bull Salzburg. He also stepped in to coach Leipzig for two separate stints, guiding them to promotion to the Bundesliga in 2016.

Amazingly, he was one of the contenders for the England national team job in 2017, but lost out to Sam Allardyce and remained with Red Bull.

Rangnick has recently been linked with a number of positions, including Chelsea and AC Milan , and is regularly mooted as a possible sporting director or head coach hire for many of Europes top teams.

Anyone who has played under Rangnick has praised his impact on their individual game, but his influence is still being felt across world football.

Andreas Beck played for him at Hoffenheim and hailed the 62-year-old for changing the face of the German game .

"Ralf was one of the most important characters in my career. He taught me a lot. He is also very demanding," Beck told Goal.

"When Ralf became part of the Bundesliga, he definitely innovated. We played this unbelievable pressing game withHoffenheim.

"It was an attacking style, with no time to breathe. We were always hunting the ball and, in our first Bundesliga season, we fought for top spot even though nobody knewHoffenheim.

"We playedJurgenKlopp’sDortmund athome, we won4-1, and IrememberKloppsaid afterwards We need to play like that!

"Ralf likes to get good players in buthe says that you then have to write software for them. He also gets involved in all parts of the club so they are functioning together.

"What happened inHoffenheimhappened afterwards atRB Leipzig; it is all his idea. Ralf has a legacy and people will remember him.

"He innovated, wanted to change things and now you see Dortmund and Bayern Munich are hunting the ball. Manchester City are doing it, too, with PepGuardiola."

With Germany stagnating under Low, the innovative Rangnick seems ideally placed to be their next head coach.