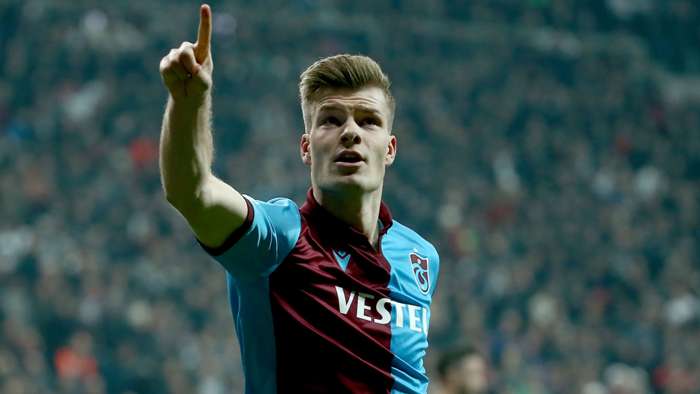 Trabzonspor have confirmed RB Leipzig have made an offer for striker Alexander Sorloth and the Turkish side are opening disciplinary proceedings after he failed to return from international duty.

The Norway striker joined the Super Lig team on a two-year loan deal from Crystal Palace, but has been heavily linked with a move to Germany.

Palace reportedly rejected an offer from the Bundesliga outfit at the start of this month, but they could return with an improved offer as they look to replace Timo Werner following his £47.5 million ($59m) move to Chelsea.

Sorloth, who scored 33 goals in 49 appearances for Trabzonspor last season, left Turkey to feature in the UEFA Nations League with his national team and netted twice as they beat Northern Ireland 5-1.

But the club published a statement on Saturday confirming that the 24-year-old has not returned and they are considering their options as the saga continues.

"We have received an offer from RB Leipzig for our player Alexander Sorloth and our board is considering this offer with the best interests of our club in mind,” the statement read.

"While we were in the process of negotiations for all parties to get together, which requires the early termination of the loan contract, Alexander Sorloth had gone to Norway to join his national team.

“As of today, the player is still not in Trabzon, thus, we have opened the disciplinary proceedings in accordance with our guidelines."

Sorloth joined Palace from Danish side Midtjylland in January 2018 but was unable to secure a place in the team’s starting XI.

He made just 20 appearances for the Selhurst Park side and his solitary goal came in a Carabao Cup win over Swansea.