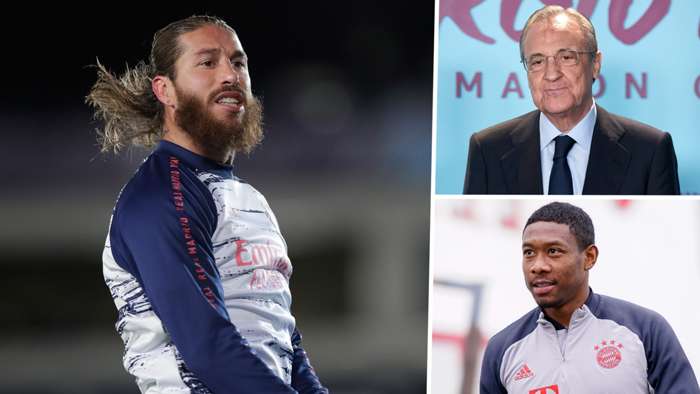 Sergio Ramos to Liverpool? Welcome back to 'silly season'!

The 34-year-old's age, wage demands and previous, to put it diplomatically, mean he will noteven be considered as a possible solution to Liverpool's defensive dilemma.

The Reds made an exception for Thiago Alcantara last summer, in order to add something different to their midfield, but they have no interest in a player who does notfit their profile for a new signing at all – and particularly one that remains a hated figure among supporters for the role he played in the game-ending injury suffered by Mohamed Salah in the 2018 Champions League final.

However, while Ramos certainly is notbound for Liverpool, that does not mean that he will not end up leaving Real when his contract expires at the end of the season.

Firstly, he has no end of genuine suitors, with Paris Saint-Germain leading the way as long-time admirers of the most prolific defender in Liga history.

Secondly, and far more importantly, Madrid are open to letting him go.

When Ramos considered joining Manchester United in the summer of 2015,Blancos president Florentino Perez was put in an awkward position.

Club legend Iker Casillas had just departed for Porto, so there would have been uproar at Santiago Bernabeu if an Andalusian who came to personify ‘Madridismo’ followed the goalkeeper out the door.

Consequently, Perez ceded to Ramos' demands and the World Cup winner was given a lucrative five-year extension. Upon signing his new deal, the player insisted the lengthy impasse over his renewal was never about money – but it certainly is now.

Perez would have let Ramos leave at the end of the 2018-19 season. Relations between the pair had become strainedafter Ramos had got himself suspended for Madrid's Champions League exit at the hands of Ajax at the Bernabeu.

That summer, the former Sevilla right-back informed his boss that there was “a very good offer” on the table from a Chinese Super League club that he wanted to accept. Perez, though, "told Ramos that it was impossible for Real Madrid to let their captain go for free."

Consequently, Ramos stayed put, which was just as well for everyone concerned, really, as the skipper inspired Real to a surprise Liga triumph last season.

As well as holding the defence together, he scored six goals in 10 appearances after La Liga returned following its coronavirus-enforced lockdown.

At that point, it felt inevitable that he would extend a contract that expires on June 30, 2021.

“I would like to end my career here,” he told reporters after Madrid clinched the title with a 2-1 win over Villarreal on July 17. "I don't think there will be a problem, either for me or for the president."

However, nearly six months on, Ramos has yet to agree a new deal with Perez, meaning he is presently free to discuss signing a pre-contract agreement for the summer with other clubs.

With the January transfer window now open, and ‘silly season’ already in full swing, the rumour mill has gone into overdrive, with some reports claiming that Ramos has already threatened to “join Lionel Messi” at PSG next season, with the Ligue 1 champions also holding an interestin the Barcelona captain, who will also be a free agent this summer.

This is not 2015, though. Perez may well call Ramos’ bluff this time, for a couple of key reasons.

Firstly, the pandemic has rocked football’s financial model to its very core. Even the game’s richest clubs have been hit hard by the pandemic. Real themselves had to ask their players to take a pay cut between 10 and 20 per cent during the first wave of the virus last spring.

So, when asked in July about the prospect of signing Kylian Mbappe from PSG, Perez dismissed the idea out of hand, telling El Transistor: “The situation is really bad. It's difficult to ask the players to take a pay cut to help deal with the situation and then make signings like that.

“That can wait. Madrid will sign the best again when the situation changes."

The situation has notreally changed, though – not yet.

Despite the economic chaos caused by Covid-19 outbreak, Madrid still managed to close out the 2019-20 financial year with a profit of €313,000, but times are still tough; Perez is still preaching prudence.

So, giving Ramos – who turns 35 in March and is presently on a €12 million-a-year (£11m/$15m) net salary– the pay rise he is demanding does not make sense from a monetary perspective.

Certainly not when one considers the second key factor in Real’s reluctance to submit to Ramos’ request: David Alaba.

The Austria internationalwill be a free agent himself this summer, with negotiations with Bayern Munich over a contract extension having completely broken down, and the classy defender is attracting interest from all of Europe’s top clubs.

It is believed that Alaba favours a move to Madrid, and the arrival of the multi-talented 28-year-oldwho has excelled since being converted into a centre-backwould undoubtedly cushion the blow of Ramos’ departure.

It certainly makes financial sense. As Goal has confirmed, Alaba is presently seeking a deal worth €13m ($16m/£12m) a year after tax,but it is anticipated than an agreement will eventually be reached. After all, it makes more sense for Madrid to pay such a wage to a player still at the peak of his powers rather than one in the twilight of his career.

Of course, fully replacing Ramos is an impossible task, even for a player as proficient in performing multiple roles as Alaba. The Spaniard’s influence extends well beyond the pitch at the Bernabeu.

As well as “writing his name into the club’s history books”, as team-mate Casemiro recently put it, Ramos remains the undisputed leader of the dressing room.

His absence would, therefore, be keenly felt, as it so often is when he is sidelined through injury or, more often than not, suspension. Indeed, Real have lost seven of their last nine Champions League matches without their captain.

His importance to the club, then, cannot be overstated, meaning we could yet see Ramos put pen to paper on a new contract and talk about how he was always going to end his career at Madrid.