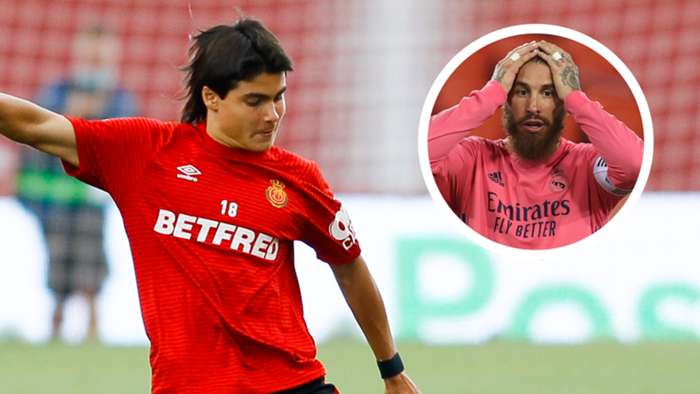 Mallorca midfielder Luka Romero has revealed the details of the conversation he had with Real Madrid captain Sergio Ramos following the teenagers record-breaking debut last season.

Romero became the youngest player in La Liga history at the age of 15 years and 219 dayswhen making his bow off the bench for Mallorca against Madrid in June.

And the playmaker, who has been dubbed The Mexican Messi despite opting to represent Argentina at international level, recalled Ramos shock when the legendary defender found out how young he was.

"As a child, you always dream of playing against Real Madrid and Barcelona, ​​so seeing and being close to their playerswas amazing," Romero toldGoalin an exclusive interviewafterhe was named on the 2021 NXGN list of the worlds top teenage footballers.

Romero added that he does not know the exact age he was when setting the record, but he has kept the shirt from the match, as well as the jersey he scored his first professional goal in, against Logrones in November.

Romeros nickname of The Mexican Messi is born out of the fact that he was born in Mexico, where his father, Diego, was playing lower-league football at the time.

The youngster only spent two years in the country, however, as his fathers career as a footballer soon saw the family move to Spain, where they have settled in Palma, the capital of the island of Mallorca.

As such, when it came to international football, Romero was left with a choice, with Mexico, Spain and Argentina –his familys homeland –all keen for him to commit to representing them.

He chose the Albiceleste, despite Mexican officials travelling to Mallorca in a bid to convince him of the benefits of playing for El Tri.

Though Covid-19 has largely brought a stop to youth internationals in South America, Romero is hopeful of soon joining up with the countrys Under-17s, who are coached by ex-Valencia and Argentina star Pablo Aimar.

"In January, we spoke," he said of Aimar. "We had meetings with the whole squad. They explained everything to us, and we watched some of the previous South American games at our age-group.

"Im very happy [to work with Aimar]. I try to listen a lot and learn a lot from him, because he knows a lot."

Romero keeps track of developments in Argentine football from afar, and recently tuned in to watch the Superclasico between Boca Juniors and River Plate.

His aim, though, is to follow in the footsteps of his hero Lionel Messi, who he has had one brief interaction with previously as a five-year old.

"He was eating at ahotel restaurant and the security guardapproached him to tell him that my brother and I were waiting at the door," Romero recalled."He got up and came to take his picture.

"I dont remember if he said anything to us. We just got our picture and left."

He added on the six-time Ballon dOr winner: "Last season, I was in the squad against Barcelona. When he came off the pitch, I followed him downstairs, but I didnt dare speak to him!"

Messi is not the only player Romero models his game on, saying: "I really like [Paulo] Dybala, [Luka] Modric, Isco.I pay attention to those who play in my position."

Romero will not turn 17 until November, and is in negotiations with Mallorca over his first professional contract.

His time this season has been split between the first team and reserve side, but there is interest in his signature from elsewhere, with Juventus, AC Milan, Inter and Napoli all keen on the youngster.

"I am comfortable in Mallorca," Romero said when asked about his future.

"In five years time I want to be a settled, first-team player, and playing regularly."