Ramos feud in the past, says Salah ahead of Champions League clash with Real Madrid 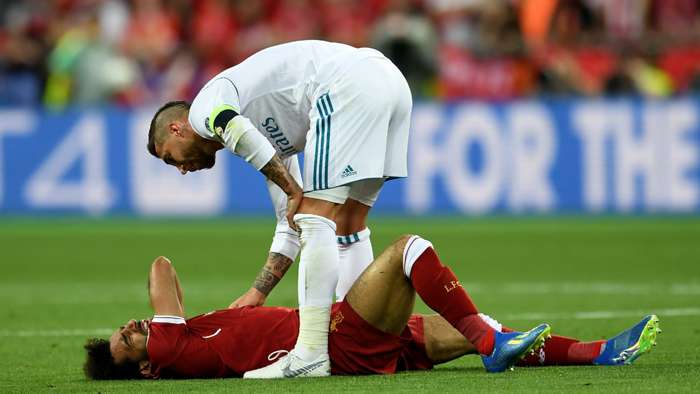 Mohamed Salah has put his issues with centre-back Sergio Ramos in the past, at least publicly, as he prepares to faceReal Madrid on April 6 in the Champions League quarter-finals.

The forward said he no longerthinks about his shoulder dislocation caused by acoming together with Ramos in the competitions 2018 final, which forced him to watch Liverpools 3-1 defeat from the dressing room.

Instead of dwelling on what occurred in Kyiv, Salah has devoted himself to securing a better result against Real Madrid this time around.

"That game is in the past, so I dont think about [what happened with Ramos]," Salah told Marca."Im thinking about the team. Everyone is focused on their team and everyone wants to win... thats it.

"Lets just say that I have special motivation to win the tie and go through to the semi-finals. Whats going to happen now isnt going to change the result of the final in Kyiv. Thats in the past.

"I think were both strong. Both teams have won their last two games in the Champions League. Both teams are prepared. Its a special competition and both teams are doing well in it."

The incident between Salah and Ramos will no doubt be talked up as one of the most intriguing sub-plots of the quarter-finals, regardless of how the players try to minimise it.

They remain central figures to their respective sides even as so much has happened in the interim - Liverpool have gone on to winthe Champions League and Premier League and Real Madrid have won La Liga and several domestic cups since their 2018 meeting. Positionally, of course, they will be locked in a direct battle.

But the stakes entering the first leg of the quarter-finalarefar greater than gaining ground in a personal feud.

"I hope to be doing the same thing that Ive been doing in recent years," Salah said."Winning trophies, scoring goals, helping my team win trophies... Thats the most important thing for me."