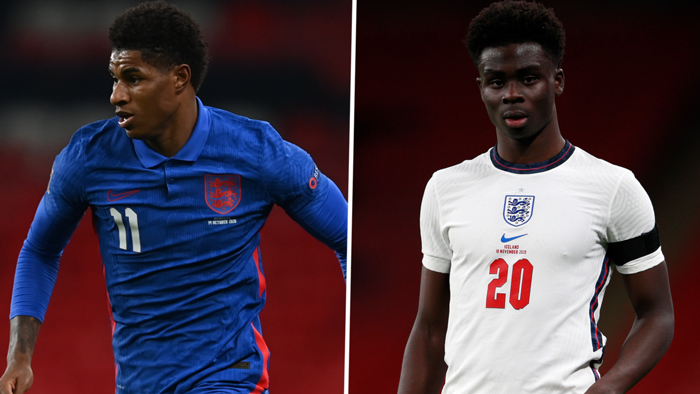 England have confirmed thatMarcus Rashford and Bukayo Saka will miss the teams upcoming World Cup qualifiers againstAlbania and Poland due to injury.

Both players sat out on Thursday as the Three Lions began their qualification campaign with a 5-0 win over San Marino.

And the FA have now confirmed the Manchester United and Arsenal stars will not feature against Albania on Sunday and Poland three days later.

"Rashford reported to St. George’s Park with an injury that ruled him out ofthe 5-0 win against San Marinoand, following further assessment, it has been decided he will continue his rehabilitation with Manchester United.

"Saka had remained at Arsenal for further assessment on an ongoing issue with the hope of joining up with the Three Lions but will now not be available for the fixturesagainst Albaniaand Poland."

The striker did not feature at the weekend against Leicester City in the FA Cup, and United bossOle Gunnar Solskjaer admitted Rashford "wasnt close" to playing in the game.

Saka, meanwhile,suffered a hamstring injury against Tottenham on March 14, but he wasable to play 74 minutes in Arsenals3-3 drawwith West Ham on Sunday.

It is unclear if Rashford and Saka will be back in contention following the international break.

Manchester United are back in action next Sunday with a league match against Brighton while the Gunners will face Liverpool the day before.

Bellingham will be fast-tracked into England squad, says Southgate

Watkins over the moon after debut goal for England