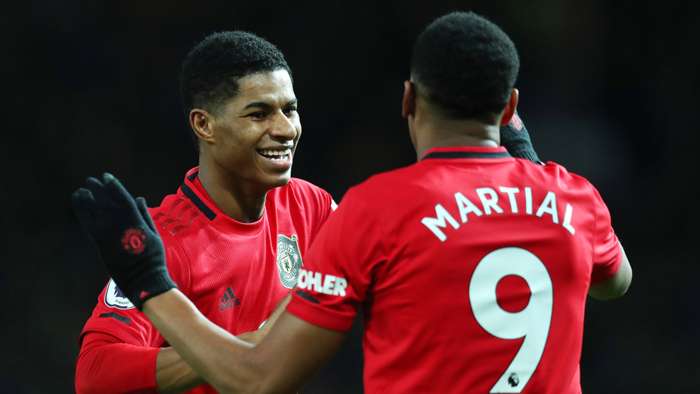 Marcus Rashford says his battle with Anthony Martial to be Manchester United’s top scorer for 2019-20 remains a friendly rivalry.

Both have posted personal bests in terms of goals, with individual bars being raised as United have enjoyed a welcome upturn in fortune as a collective.

Academy graduate Rashford has been on an upward curve for some time, with the England international now 22 years of age and no longer a fresh-faced rookie.

He has found the target on 22 occasions through 42 appearances in the current campaign.

It appeared at one stage as though injury would bring his season to a premature conclusion, but a coronavirus-enforced break ended up working in his favour.

Rashford has returned to the fold alongside Martial and helped United to a third-place finish in the Premier League and the quarter-finals of the Europa League – where they will meet FC Copenhagen.

He has three goals since the restart, but none in his last three outings.

France international Martial took in a similar run before netting the winner in a continental clash with LASK last time out, with that effort taking him to 23 for the season.

He now leads an in-house Golden Boot race at Old Trafford, but Rashford insists collective success – rather than individual acclaim - remains the focus of everyone on United’s books.

“Tony wins, I win, we all win. That’s my guy,” Rashford posted on social media.

Rashford and Martial have not been the only success stories for United in 2019-20, with Mason Greenwood also joining the attacking party.

The talented teenager has enjoyed a breakthrough year and grabbed 17 goals of his own.

A collective return of 62 efforts from his front three means that Red Devils boss Ole Gunnar Solskjaer now boasts one of the most devastating front lines in Europe.