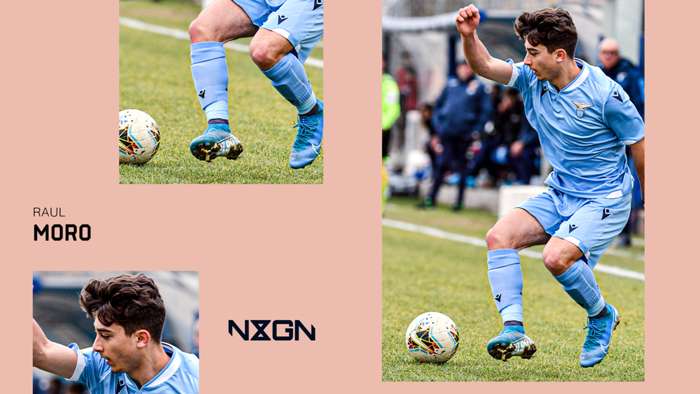 When players are schooled within Barcelona's La Masia academy, there is a certain style of play that tends to define each youngster, even if they do not always share the same attributes.

So when a player comes along that instead continually looks to pick up possession, run at defenders and take as many of them on as possible before looking for a team-mate, the Camp Nou outfit are left with a decision to make.

That is exactly what happened when Raul Moro arrived at La Masia in 2018.

Having taken his first steps with a professional club at Espanyol, the Catalunya-born teenagermoved across the city to the Blaugrana, only for coaches to find that his style of play was not conducive to the 'tiki-taka' mentality that is encouraged at youth level.

Though clearly a talent, Barca were happy to allow Moro to leave on the final day of the 2019 summer transfer window, with Lazio willing to pay€6 million (£5m/$7m) to bring the then-16-year-old to Rome.

"It wasn’t only Lazio, also teams like Chelsea," his agent, Junior Minguella, toldLa Lazio Siamo Noi of teams interested in his client."But we decided that the Biancocelesti were more adapted to the development of the boy, both for their idea of the game and the possibility of seeing him in the first-team in the future."

Lazio are no strangers to signing promising youngsters from Barca, having previously acquired Keita Balde from the Liga giants back in 2012 before recouping10 times the€300,000 they paid for the Senegal international from Monaco in 2017.

Like Keita, Moro is a direct winger who possesses electric speed and almostevery trick in the book, and he is not afraid to show them off either.

Most comfortable playing off the left-hand side, the Spain youth international originally had to wait two months before making his first competitive appearance in Lazio colours as he waited for FIFA to sign off on his transfer.

That did not stop him, however, from making an immediate impact on manager Simone Inzaghi.

Having arrived in Rome just weeks earlier, Moro was part of a Primavera side that was tasked with playing against the Lazio first-team in training when, after an impressive first-half, he was told by Inzaghi to switch teams to join the more senior players.

He continued to thrive alongside more seasoned colleagues in a display that marked him out as possessing both supreme ability and confidence.

Though he returned to the Primavera - or Under-19- squad thereafter, he remained in Inzaghi's thoughts throughout the 2019-20 campaign, and after scoring in each of the final two youth-team games before coronavirus brought a premature end to their season, he was called back to train with the first-team following lockdown.

He was rewarded for his showings on the training ground by being introduced from the bench to make his first-team debut in the final moments of Lazio's clash with Juventus on June 20.

Aged 17 years and seven months, he became the youngest player to debut for the club since Inzaghi took over in 2016, as well asthe 15th-youngest to ever play for the two-time Italian champions.

"I don't regret leaving Barcelona, ​​where I would have continued in the youth teams," Moro said when discussing his maiden appearance."Here I already made my Serie A debut.

"At the end of the match against Juve I asked Cristiano Ronaldo for hisshirt. He told me to wait for him in the tunnel because he had to do an interview on TV. When he arrived he shook my hand and said: 'How are you, youngster?'"

Though that remains his only senior appearance to date, Moro's form in the early weeks of the new campaign suggests it will not be long before he earns a recall to Inzaghi's side.

Across eight league and cup games for the U19s this season Moro has eight goals, with his tally of six in the league enough for him to be the joint-top scorer in Primavera 1.

Almost every week a clip of Moro twisting and turning his way past an opposition defender goes viral among youth football fans, though the season has now been paused as Covid-19 cases continue to rise in Italy.

"He can make the difference," Minguella believes."That's shown by the factthat at Barcelona they compared him to Lionel Messi.

"Of course, it’s an exaggeration, but it lets you understand the kind of player he is."

Lazio fans will be hoping Moro can have a Messi-esque impact for them over the course of the next 12 months.