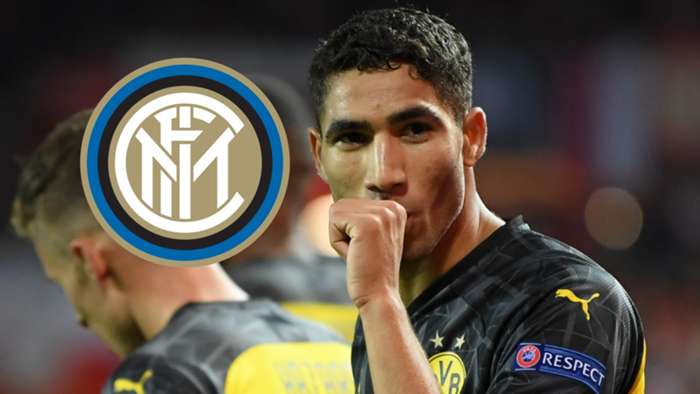 When transfers are analysed, there is usually a winner and a loser. One team always benefits more than the other from the deal.

It is quite unusual, then, for there to be two losers in a deal, but this is exactly what has happened in the transfer of Achraf Hakimi from Real Madrid to Inter.

The Morocco internationalliftedthe Champions League with Madrid back in 2017-18, but a lack of first-team opportunities saw him spend the last two seasons on loan at Borussia Dortmund.

Hakimi has been a revelation in Germany, showing his versatility by playing in either full-back position as well as on the wing, contributing 12 goals and 17 assists over those two campaigns.

Dortmund sporting director Michael Zorc was eager to extend his stay at Signal Iduna Park , where the 21-year-old was a key part of Lucien Favre's exciting young side who ultimately fell short ofBayern Munich in the Bundesliga, but set a new club record with 84 league goals in 2019-20.

"His deal with Dortmund is ending," Zorc said last week."But we're interested in finding a solution with Real again and find a solution where he will be back playing at BVB next season."

However, financial stresses caused by the coronavirus pandemic priced the German side out of a moveas they were not willing to meet Madrid's surprisingly low€40 million (£36m/$45m) asking price.

Instead, Inter haveseized their chance to snap up Hakimi, who scored twice against theNerazzurri in November to help Dortmund reach the knockout stages and, in turn, knock the Serie A side out of the Champions League.

Hakimi has been on Inter's radar for many years, which is not surprising, given the precocious talent he showed rising through the ranks of Real's academy.

Former Morocco international Houssine Kharja, who played for Inter back in 2010-11 revealed thatsporting director PieroAusilio had asked him about Hakimi back in 2017 , and believes that his compatriot will be a perfect fit in Milan.

"Ausilio has been following him for a long time,"Kharja told Gianluca Di Marzio ."Two and a half years ago, when he was still at Real Madrid and was not playing, he started asking me about him several times. Inter is a major club, and Conte's tactics will be perfect for him.

"He is very strong, in all the years of the national team I have never seen anyone like him. He is very intelligent, he will be able to adapt to Italian football. He may struggle in the defensive phase, perhaps at the beginning, but he will certainly be helped. After all, even Maicon had some difficulties, then he won the treble. Hakimi is ready and will improve.

"Playing in a stadium like San Siro will be an extra stimulus: he's not afraid of anything, like me. He played in Madrid and Dortmund, also winning aChampions League. The Meazza can only charge him up."

Having hit the ground running in Germany, there is no reason to believe Hakimi will not do the same again in Italy. The attacking full-back is fearless in possession, technically excellent and is a threat whether he sticks to the flank or cuts inside.

Kharja highlighted his defensive weaknesses, which were also issues in Dortmund, but Hakimi is still just 21, so has plenty of time to improve his game, especially working under a manager like Conte.

Zinedine Zidane could have been the man to help improve Hakimi's game, but the Real Madrid manager will no longer have the chance to see the academy graduate develop.

Hakimi's reasoning to leave Santiago Bernabeu is obvious, as he wants to play every week, but Madrid's reasoning for selling him is less clear.

The Dortmund loan deal was ideal as Hakimi remained a Blanco, while also getting the gametime he so desired. Had he stayed in La Liga for 2020-21, he would have been a backup to DaniCarvajal, but with the Spanish right-back often failing to show world-class qualities, Hakimi usurping him as first choice seemed a very realistic possibility.

Agent Alejandro Camano admitted earlier this month that Hakimi's desire has always been to play for Real Madrid , but knows that he will have to spend a few years improving his game elsewherebefore he gets the chance.

"He wants to play games, like this season, where he has started every match,"Camano told Onda Madrid before the Inter transfer materialised."There's no rush. His only aspiration is to play games to help his development.

"There's a magnificent dialogue with Real Madrid and they always expect to have him on their radar. What we don't want is to distance ourselves from them too much.

"So, we'll reach an agreement of some sort over whether he stays or goes, but without forgetting that the aim is to play for Real Madrid one day because, for him, it's the best club in the world.

"It could be a short wait if Real Madrid offer him to stay now or a long wait if he doesn't stay, but the aim is always the same - end up playing for the best club in the world."