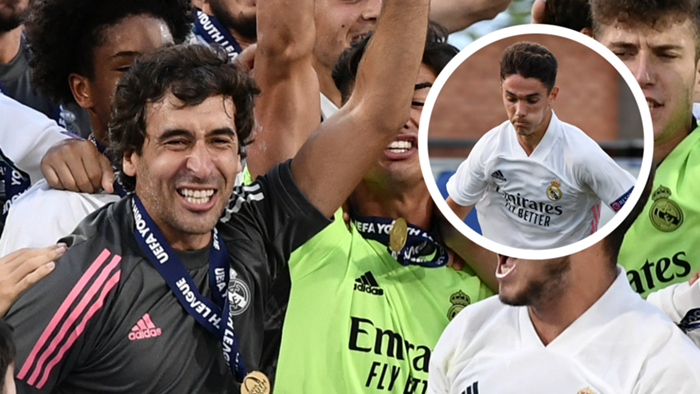 The Under-19mini-tournamentwasplayed at theColovrayStadium;as with the Champions League,itwas concluded in one-off matches at a single venue because of coronavirus.

As Barca disintegrate,Madrid canlook on from a position of relative security during this brief break between seasons.

They have recaptured the Liga title, Zinedine Zidane is a firmly popular choice in the managerial hotseat – and the club has achieveditsEuropeansuccess, albeit at underage level.

The Spanish side doubledtheir advantage on the stroke of half-time when Henrique Jocu turned Arribas' cross into his own net.

Benfica pulled one back in the 49th minute, but Madrid restored their two-goal advantage a minute later courtesy of Miguel Gutierrez's low finish at the back post.

Benfica scoredfrom a corner in the 57th minute to reduce the deficit again, and the Portuguese side were handed a golden opportunity to draw level in the 68th minute but Madrid goalkeeper Luis Lopez pawed away Tiago Dantas' penalty, and made several more key saves, ensuring the title went back to Spain.

Real’s triumph was a team effort-no single player scored more than four goals in the wholecompetition-however goalkeeper Lopez and final-winning left-back Gutierrez, who regularly trains with Zidane’s first team, are among the standouts, as is 17-year-old striker Israel Salazar, who has scored more than 150 goals at age group levels.

However, the cream of the crop isassistkingArribas.The young Spanish midfielder was arguably the best playeron show inNyon. He was moved by Raul into a false nine roleand dominated against Benfica.

An all-action player who demands the ball at every opportunity,Arribaspossessesa deep bag of tricks to go with his confidence;he can create openings either just behind the striker, orby dropping deep to escape a high press.

Doubts persist at Real about whether Arribas is lightweight at thisstage, and it looks likely the 18-year-old will be posted with the B team – Castilla – next season in order to bulk him up in readiness for senior action.

Raultemporarily took charge this summer when Dani Poyatos left to coach Panathinaikos, as Real decided not to immediately appoint a new full-time coachwiththe U19 domestic season ended early by coronavirus.

He had no coaching experience before his involvement at Real – he was an ambassador for the club before being invited to manage the U15s, then Castilla– but Raul came through La Fabrica andknowswhat the players require.

He has impressed both witha young squad atCastilla and now withJuvenilA andis tipped within Real as a successor to Zidane.

This is the most successful seasonat U19 level forthe crop aiming to follow current first team luminaries including Dani Carvajal, Lucas Vazquez and Federico Valverde – and a lot of that is down to the manager.

As a striker,Raul spent 16 yearsatReal and is theirsecond all-time top scorer with 323 goals froma club record741 appearances.He has taken that attacking focus into management, while also proving a disciplinarian.

Senior figures are impressed by Raul’srules banningmobile phones before matches,as wellprohibitingyouth players buying expensive cars or showing up in jewellery or designer clothes.All Castilla players must wear club tracksuits before and after games.

Stepping up from Castilla to the senior role is not a guaranteed path to glory. Zidanesucceeded;Santiago Solari failed.

Raul however is a club legend more in the mould of the Frenchman than theArgentine andcould command respect more easily.It is early to say, but the former Spain captain is a coach with a seriousfuture andwill be a contender for the main Madrid role whenever the current incumbent departs.

“This is an extraordinary team and we were hungry to win this tournament,” Raul said after the final whistle on Tuesday. “This is comparable with some of the biggest moments I experienced as a player. It’s wonderful and I’d like to congratulate the lads because this is a huge step in their careers.

“It’s a historic day. I’ve been lucky enough to experience many beautiful things and this is another one of those.How these lads havecompeted in all four games despite not being used to playing so often, they should be immensely proud”.

Having guided the U19s to European success, it remains to be seen whether Raul will continue his dual role in 2020-21, with Spanish football still at the mercy of coronavirus.