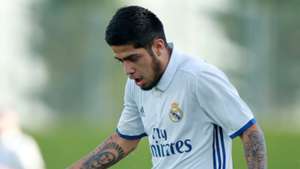 Real Madrid forward Sergio Diaz faces the risk of being jailed after he was caught as part of a raid at the house of an international team-mate.

Diaz, on loan with Cerro Porteno in his native Paraguay, was found by police at the home of team-mate Sebastian Ferreira after prosecutor Laura Romero led a raid due to suspicions of a large gathering.

Several players were among a gathering of people involved in a game of volleyball, according to video obtained by ABC, with neighbours having reported parties to police frequently since March.

Ferreira, a player for Libertad on loan from Morelia in Mexico, and Renato Mencia, who plays for La U Universitarios, were among five that have been indicted so far, with Mencia claiming that he has been at Ferreira's house since the beginning of quarantine.

The players, who turned themselves in voluntarily, said that they were training at the time of the gathering.

Paraguayan internationals Diaz and Mathias Villasanti are set to be summoned and questioned by police.

"Several pieces of evidence were seized, including the volleyball net, balls, and several bottles of beer," the prosecutor told reporters.

"We were able to verify that there are more than two dozen, three dozen bottles; likewise, several cans of beer, sporting goods and shoes. They were all around the field and were not for personal use."

The prosecutor also believes that many people fled the scene before police intervention: "They took pictures and we will be checking with the neighbours to see if some people saw people leave or not, and to see if we have any kind of videos or closed circuit."

Diaz has been with Real Madrid since 2016 after making the move to the Spanish side from Cerro Porteno following two seasons with the club's senior team.

The forward has primarily featured for Real Madrid B in the years since, having yet to make his first-team debut as a member of the senior team.

Diaz has earned one cap for Paraguay's national team, having played for his country at youth level.