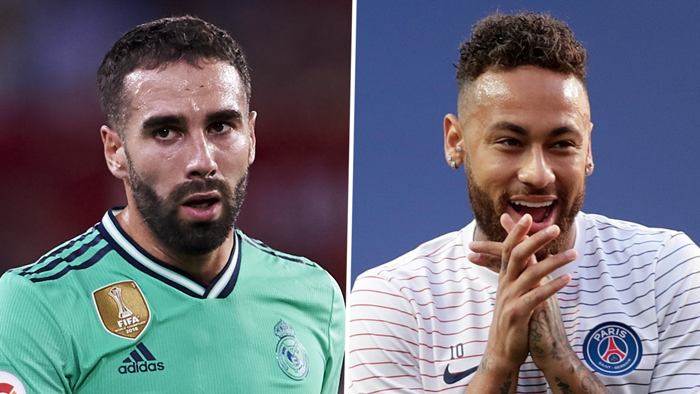 Real Madrid defender Dani Carvajal has named Neymar as the toughest opponent he's ever faced, and also revealed what he believes to be Zinedine Zidane's "greatest virtue".

More often than not, the Spain international has been able to come out on top, having won four European Cups and two La Liga titles during his time with Madrid, but there is one man he has never quite been able to get to grips with.

Carvajal has been tasked with keeping Neymar at bay on several occasions, most recently in the 2019-20 Champions League group stages.

The two men featured during a 2-2 draw between Madrid and Paris Saint-Germain last November, and also went toe-to-toe in several Clasico encounters while Neymar was on Barcelona's books between 2013 and 2017.

Carvajal has admitted that he finds it "difficult" to keep the Brazilian superstar quiet due to a combination of his skill and intelligencein possession.

"Neymaris the striker who has been the hardest to defend," the Madrid right-back told Esquire. "He is a very elusive player, technically very good. He attacks space, he is going to ask for it, he can score. It is difficult to defend him."

Carvajal went on to praise Madrid's current head coach Zidane, who has guided the club to 11 major trophies during two separate stints in the Bernabeu dugout.

"His greatest virtue is the tranquillity that he transmits to us," said the 28-year-old. "He never alters and, whether things go right or wrong, he keeps his composure.

"That is something that gives the players a lot of peace of mind.In addition, his strong point is that he trusts the squad a lot. He makes us feel that we can all contribute, and that makes his team a winning team.I have won many titles with him, and I learn from his experience daily."

Zidane's men wrestled the Liga title away from Barcelona last term, which marked their first domestic triumph since 2017.

Madrid have enjoyed unprecedented success at home and abroad in the modern era, but Carvajal has conceded that the constant pressure of expectations makes it difficult for lasting relationships to be formed behind the scenes.

"It's not easy to make friends atReal Madrid," he said. "When I went toBayer Leverkusen, where the average age was 23, it was easier.

"We all shared hobbies, we had no wives or children. AtReal Madrid, everyone has their lives made and it is such an established club, in which everyone fights so much that there is no time for more. So, private life is kept on the sidelines."

Despite the weight of responsibilitythat comes with playing for Madrid, Carvajalcan't see himself playing anywhere else before hanging up his boots.

The Spaniardis also eager to get his hands on more major silver, as he added: "I would love to win many titles. I would like to retire in white. I have won everything with the club and, at the title level, it is difficult to ask for more - but I would like to win a fifth Champions League withReal Madrid.