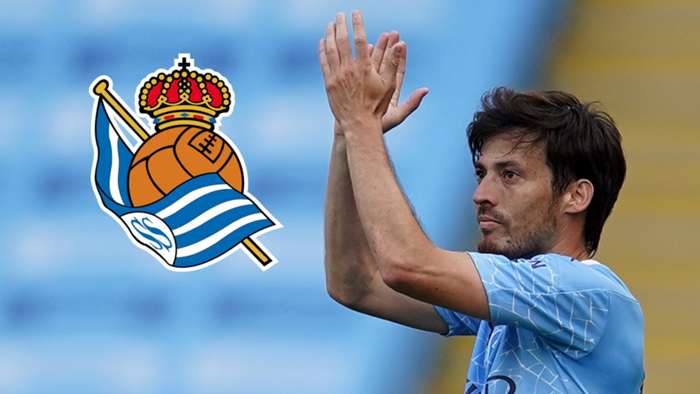 David Silva has been hailed for making the "perfect" choice by joining Real Sociedad rather than Lazio following his departure from Manchester City.

Former Spain international Silva left the Etihad Stadium at the end of the 2019-20 campaign after trophy-laden decade at City.

Having been linked with moves to MLS and Qatar, Silva seemed set to join Lazio following their fourth-placed finish in Serie A last term.

However, the 34-year-old eventually signed a two-year deal atSociedad, where he will help fill the gap left by Martin Odegaard after the Norway playmaker was recalled from his loan spell a year early by Real Madrid.

And former Barcelona defender Andrea Orlandi, who will be working as a pundit for LaLiga TV in the UK and Ireland this upcoming season, believes Silva made the right call regarding his future.

"I think he did make the right decision," Orlandi told Goal."I think he watched the way they play and it is perfect for David Silva.

"Look at the way Lazio play; they play 3-5-2, a very Italian system. They hit teams on the counterattackso he thought he could play in that system. but that he would have to do a lot of running and change the way he plays.

"He would also need to know a new league, how to train, play and live there. So knowing the way Sociedad play, how nice San Sebastian is, the structure of the club, that the training ground is great and the new stadium is there - it had all the ingredients to chose Sociedad over Lazio.

"In Italy, the culture and mentality is different and the opposite to Spanish teams. Sociedad was the best for him."

It is an opinion that former City scout,Terry Gibson, shares as he prepares to work alongside Orlandi in 2020-21, with the 57-year-old keen to see how Silva fits in among Sociedad's young squad.

"When Odegaard left Real Sociedad to go back to Real Madrid, I was worried at how they were going to replace him," Gibson (pictured below), who represented Manchester United and Tottenham as a player,added. "It was a real shock when we had the news that David Silva was returning to La Liga with Real Sociedad.

"I imagine he is not going to earn as much money at Sociedad as he would at Manchester City. I think it is genuinely a case of thathis family are happy to go back to Spain after many years in Manchester.

"I think what attracted him to the club is the way the team played. He obviously watched La Liga last season.

"He must have seen how Real Sociedad were playing last season. He must have been attracted to the idea of being the older player among younger players. They can do the running, and at the same time he can provide the magic.

"It would have been easier to stay at City. I am sure they would have wanted to keep him, maybe not playing as many matches, but he wants to come and do what Santi Cazorla did at Villarreal last season.

"He can play every week, be an important player and I can see why he chose Sociedad. It is a perfect fit as well.

"I am excited about seeing them again next season with so many good young players coming into that team. They have become a real good,young, attractive team to watch.

"They have the likes of Ander Barrenetxea, who is in his teens.Alexander Isak is a fantastic young player as well, with Mikel Morino having had a fantastic season. Martin Zubimendi came in and played as a really mature holding midfield player at 21-years-old.

"When you have those young players, you need those good experienced players with personality and character. David Silva is the perfect personality for that role alongsideNacho Monreal, who had a fantastic season last year.

Odegaard, meanwhile, returns to Santiago Bernabeu after an impressive first full season in La Liga, with Zinedine Zidane having reportedly requested personally that he be brought back to the Spanish capital a year ahead of schedule.

The former teenage prodigy will battle with the likes of Luka Modric, Toni Kroos, Isco and Federico Valverde for a regular starting berth, and Orlandi feels the 21-year-old is ready to make an impact for Los Blancos.

"He was one of the players of the season before Covid. He picked up injury which meant he struggled a bit when the season restarted, but he has plenty of quality," Orlandi said.

"Real Madrid want him back because they think he can actually play.

"They now need a replacement for Luka Modric, who is probably having his last season, and Odegaard might be that guy. I think Odegaard is ready to play for Real Madrid, maybe not every game but in rotation that Zinedine Zidane does really well.