Reynolds, Yedlin and the USMNT stars who did - and didn't - make deadline day transfers 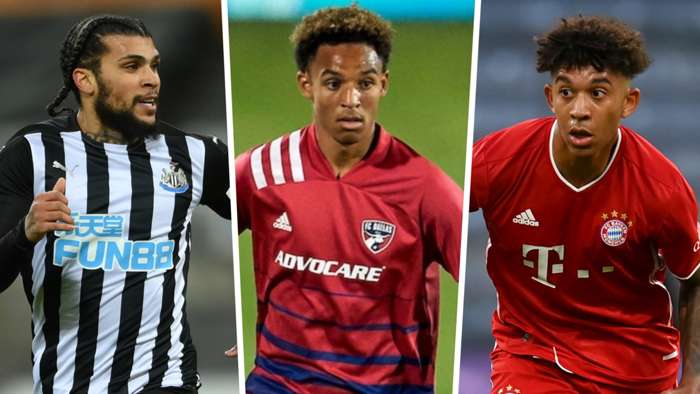 Transfer deadline day is alwaysbusy,but this one, in particular, was busier than most for American players.

Having already seen Jordan Morris, Joe Scally, Brenden Aaronson and Mark McKenzie head to Europe this month, several others followed suit on Monday to conclude what was a flurry of transfer dealings.

From experienced international starsto young American starlets looking to make their own European breakout, Goallooks back at the American stars that changed clubs on Monday, as well as two that did notdespite widespread rumors...

The much-discussed transfer saga is over, and Bryan Reynolds is now a Roma player.

Previously linked to Juventus during the early weeks of January, Reynoldseventually made his way to Romewith a few surprise developments along the way.

On top of that, there are several performance-related bonuses that could end up being worth a total of €5.65m ($6.8m), while FC Dallas will maintain a sell-on clause down the line.

As for Reynolds, he gets the massive step up that he earned through his half-season of eye-catching displays in MLS. His attacking capabilities have never been in doubt but, at Roma, the 19-year-old full-back is now at a club that could help him refine his defensive chops in a five-at-the-back system built to get the most out of him.

And, if that happens, the USMNT's right back battle will only get more interesting, withReynolds set tojoin Sergino Dest and Reggie Cannon in that fight sooner rather than later.

One of the USMNT's most versatile veterans, Paul Arriola will head to Swansea as he looks to return to full fitness following a catastrophic injury.

The winger suffered a torn ACL at the start of the 2020 MLS season, only making his return to actionone match before the campaign ended.

He has since returned to the USMNT, though, scoring three goals across two games against El Salvador and Trinidad & Tobago.

With the MLS season not starting until April, the move to Swansea will give Arriola much-needed games while offering the Championship club another dynamic attacker in their push for promotion.

The Welsh side does not have an option to buy Arriola, though Swansea and D.C. United are both owned byJason Levien.

Arriola will join up with Morris, whomSwansea do have an option to buy from theSeattle Sounders once his loan spell is complete.

After four-and-a-half years, DeAndre Yedlin's time at Newcastle is over, with he former Seattle Sounders and Tottenham full-back havingsigned with Turkish giants Galatasaray.

The move is far from a surprise, as Yedlin's deal with Newcastle was set to come to an end this summer and the clubwas not expected to offer him a new deal.

In trading Tyneside for Turkey, Yedlin will now look to help Galatasaray return to the Champions League, with the club currently sitting third in the Super Lig behind neighbours Fenerbahce and Besiktas.

Daryl Dike's move to Barnsley seemingly came out of nowhere.

Having made his USMNT debut on Sunday, Dike made the move to England to join up with Barnsley on loan less than 24 hours later.

Barnsley will have a purchasefee priced at $20 million, with Orlando City retaining a 20 percent sell-on fee, reports the Orlando Sentinel, though taking up such an option would smash the club's transfer record.

The move to the Championship only continues Dike's meteoric rise, with the striker having only been drafted by the Lions last year.

The 20-year-old scoredeight goals in 17 appearances last season, earning two call-ups to the USMNT in response to those strong rookie-season numbers.

Like Arriola, Dike is expected to miss the start of MLS preseason, and could miss the beginning of the regular season as well.

Chris Richards has hada taste of first-team minutes at Bayern Munich this season but, at this point of his career, his development requires more than just that taste.

The 20-year-old central defender will remain in the Bundesliga as he heads out on loan to join Hoffenheim, where he willbe reunited withSebastian Hoeness.

Last summer, Hoeness took charge at Hoffenheim after previously coaching Richards with Bayern Munich II, where the defender made 38 appearances in the third tier.

Richards, widely seen as one of the brightest defensive prospects in the USMNT pool, has featured eight times for Bayern, who have deployed the American as a right-back.

In addition, the FC Dallas youth product made his USMNT debut in November against Panama.

Tyler Boyd has fallen out of the picture with the USMNT, but the winger did get a much-needed change of scenery on Monday that could reignite his career.

The winger has not played in months, having been excluded from Besiktas squad tosatisfy the foreign roster cap. In need of actual games, he willhead to Sivasspor, who sit 14th in the Turkish Super Lig.

Before this season, Boyd had fared relatively well with Besiktas, scoring four goals in 34 appearances after signing in the summer of 2019.

Internationally, Boyd has earned 10 caps, scoring two goals at the 2019 Gold Cup against Guyana. However, he has not been with the USMNT since November 2019.

Gregg Berhalter made the stunning revelation during the recent USMNT campthat Jozy Altidore could be on the move but, at least through the European deadline, that has not yet come to fruition.

Altidore's future remains uncertain, with an ESPN report claiming that the forward "had reached a breaking point" with Toronto FC.

Altidore himself took to Twitter to seemingly dispel those rumors, saying: "Don’t believe everything you read. The devil is working overtime."

Berhalter himself said that there had been outside interest in Altidore, and a move could still happen even if it may not be to Europe.

Another window, another Aaron Long transfer saga that ends with a thud.

Having previously been denied moves to England in three of the last four windows, Long looked like he could finally be bound for Europe on loan this winter.

He had been linked with the likes of Reading, but the big news broke last week that Liverpool could be interested in making a move.

That reported interest never amounted to anything but, even so, the New York Red Bulls did turn down overtures from a Championship club. According to the Athletic, the Red Bulls had no intention of letting Long go, even on loan, as they want their defender in for preseason.

With former start Tim Parker now in Houston and newcomer Andres Reyes now with the team, the Red Bulls want Long involved to help build a foundation this spring.