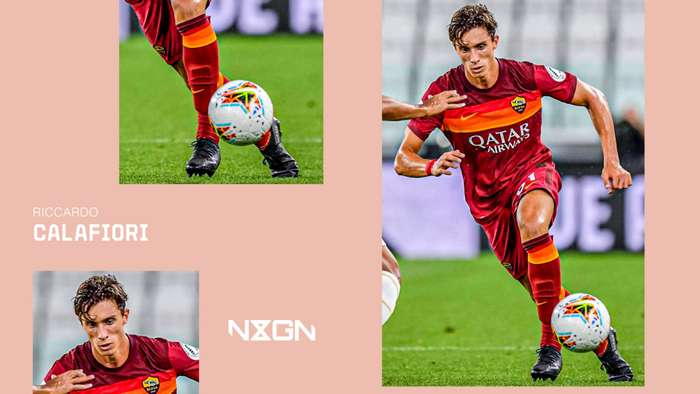 At the age of 18, Roma left-back Riccardo Calafiori is regarded as one of the best young prospects in Italian football, with the teenager beginning to make his mark on the Giallorossi first-team.

Making just his second appearance for Roma's Under-19s against Viktoria Plzen in the UEFA Youth League in October 2018, Calafiori was the victim of a horrendous, studs-up challenge from Vaclav Svoboda in the 82nd minute that "tore his right knee to pieces".

All of the ligaments in Calafiori's joint had been ruptured along with his meniscus and articular capsule, with doctors declaring at the time it was an injury that "occurs once every 10 years" and was more akin to the kind of traumaa motorcross rider would suffer from, rather than a footballer.

The youngster was told, in no uncertain terms, that the injury was career-threatening.

An individual with less desire to make it to the top may have given up on their dream there and then, but Calafiori had come too far to walk away. After undergoing surgery in the United States, his long road back to the training pitches began.

A highly-regarded member of Roma's academy since the age of nine, Calafiori first came to prominence in the 2017-18 seasonwhen, as a 15-year-old, he played a key role in the club's U17s winning the league and cup double.

Such was his talent, super-agent Mino Raiola quickly moved to become his representative, but just months later the youngsterfound himself in a hospital bed wondering what was coming next.

It was on the day his injury was suffered that it became clear just how aware those around the club were of his talent.

Later that same day, Roma striker Edin Dzeko celebrated his goal against the Viktoria first-team in the Champions League by running over to the bench, grabbing Calafiori's shirt and showing it to the crowd in tribute to the stricken starlet.

In total, 347 days passed between Calafiori's injury and his return to competitive action for Roma's Primavera side at the start of the 2019-20 campaign. It was at this point that his second career began.

"The journey was definitely the hardest thing I faced," he toldRoma TVfollowing his recovery."I had a knee that was three times the size of the other one."

Aside from making Paulo Fonseca's matchday squad on three occasions in the autumn, Calafiori spent the majority of his first season back playing for the U19s, and scored in each of what turned out to be the final three matches of the campaign as Covid-19 forced the youth season to be prematurely abandoned.

He was, however, invited to train with the first-team when Serie A resumed following lockdown, with Fonseca handing him his debut when he was named in the starting line-up to face champions Juventus on the final day of the campaign.

Playing as a wing-back on the left-hand-side, Calafiori made quite the impact as he won a penalty that Diego Perotti was able to convert before finding the net himself, only for it to be ruled out for offside as Roma ran out 3-1 winners in Turin.

Despite being linked with Manchester United, Juventus, Paris Saint-Germain and Inter during the 2020 summer transfer window, Calafiori remained with the capital clubas he was made a permanent member of the first-team squad.

Although he missed a month between October and November after testing positive for coronavirus, the teenager returned to the fold and was immediately named in Fonseca's XI for theEuropa League clash against Romanian outfit CFR Cluj.

It was in his second continental appearance, however, that he grabbed the headlines for all the right reasons.

Facing Swiss side Young Boys at Stadio Olimpico, Calafiori saw a free-kick cleared to him around 25 yards from goal, and the defender did not even need to take a touch before smashing the bouncing ball into the top corner for his first professional goal.

"It was more beautiful than that was difficult," he told reporters post-match."Of course with the public it would have been better, but I'm happy."

Fonseca, meanwhile, was keen not to build up his new charge too much, saying: "Calafiori is a young player with talent, but he needs time to grow. Suddenly treating him like he’s the best in the world right now is not helpful for the player. We trust he’ll have a great future."

Two substitute appearances in Serie A have since followed for Calafiori, who has experience playing as a left-sided centre-back as well in his favoured wide role.

Already a part of Italy's U21 squad, he signed a new contract with Roma in December to tie him to his boyhood club through until the summer of 2025.

"It has been my dream since I was a child," he said upon putting pen to paper on his fresh deal."It is the most beautiful thing in the world. It means a lot to me.

"Every boy who grew up here, with a passion for these colours, dreams of one day making it this far. It seems that I have succeeded and I still don't realise it. My dream now is to be able to win something with this shirt."