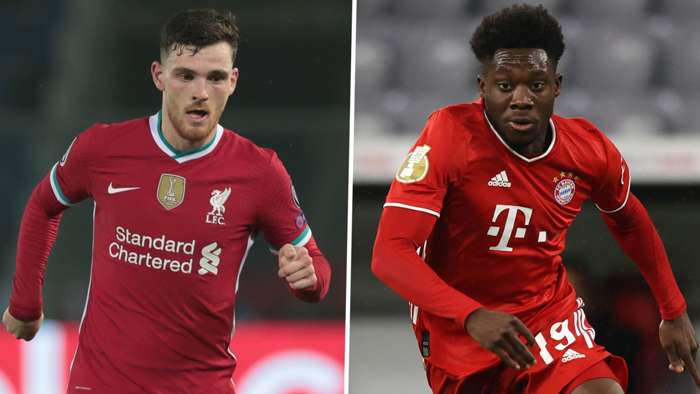 Andy Robertson and Alphonso Davies are the best left-backs in the world, claims Renan Lodi, with the Atletico Madrid defender a big fan of star turns on the books at Liverpool and Bayern Munich.

Both have gone on to become title winners in England and Germany respectively, while also capturing much-coveted Champions League crowns.

There is the promise of more to come from them, with Robertson 26 years of age while Davies is just 20.

Lodi, who is forging an impressive reputation of his own in Spain, believes key men on Merseyside and in Bavaria have risen to the top in their chosen position.

He told FIFA’s official website: “Robertson of Liverpool and Alphonso Davies of Bayern Munich are outstanding players. Davies is even younger than me, and Robertson is still young. They’re great players and have so much potential.”

Lodi added on those he modelled his own game on growing up, allowing him to become a regular for Atletico and Brazil: “Roberto Carlos was a great player, but I didn’t see too much of him because I’m young.

“I really like Filipe Luis, Alex Sandro, who I watch a lot – the way he defends, the way he reads the game. Marcelo too.”

Lodi is learning from some of the best within the Brazil national team set-up, and is also surrounded by superstars at Wanda Metropolitano.

Luis Suarez now forms part of that group, with the prolific Uruguayan having completed a shock move from Barcelona over the summer.

“He’s a real joker, a lot of fun,” Lodi said of a fellow South American.

“He also does his utmost to help everybody day-by-day. I try to learn the maximum possible from the time I spend with him, because there are no words to describe him. He’s strong, very talented, finishes with both feet. He’s a magnificent player and a huge asset for our club.”

Lodi is also enjoying working alongside Joao Felix in Madrid, with the Portuguese youngster seemingly destined to become a modern-day great.

He added on the talented 21-year-old forward: “He’s my brother at the club. We’re almost the same age. We get along really well.