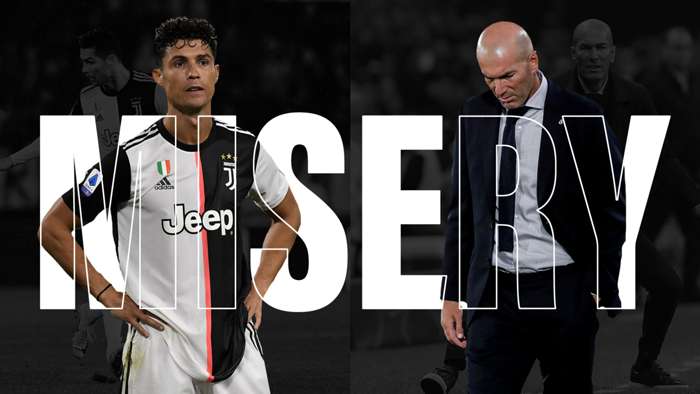 Lisbon could have been the setting for a fascinating reunion on Saturday night, between Cristiano Ronaldo and Real Madrid. Neither will be present at the Estadio Jose Alvalade, though.

Ronaldo's Juventus were denied a place in the last eight of the Champions League by lowly Lyon, while Madrid were beaten with embarrassing ease by Manchester City.

Two years after their surprise divorce, Ronaldo and Real are still struggling to prove that they are better off apart.

It was the Portuguese, of course, who initially took full responsibility for the split.

In an open letter to Madrid's fans, he asked for understanding, explaining that in spite of all of the "love and affection" he had experienced atSantiago Bernabeu, he felt it was time to "open a new stage" in his life.

He also made a point of thanking everyone with whom he had worked during his nine years in Madrid, including the club president.

However, Ronaldo subsequently admitted that Florentino Perez had played a pivotal role in his departure.

During that final season in Spain, the forward felt that something had changed in their relationship; that Perez no longer looked at him as lovingly as he once had.

"In the first four or five years, I had the feeling of being 'Cristiano Ronaldo'. Less afterwards," Ronaldo explained to France Football.

"The president looked at me through eyes that didn’t want to say the same thing, as if I was no longer indispensable to them, if you know what I mean.

"That’s what made me think about leaving. Sometimes, I’d look at the news, where they were saying I was asking to leave.

"There was a bit of that, but the truth is I always had the impression the president would not hold me back."

And he was right. Perez was certainly sorry to see Ronaldo go but he was never going to turn down €100 million (£90m/$117m) for a 33-year-old attacker – even one as talented as prolific as the Portugal international.

As well as pocketing a colossal transfer fee, Madrid also removed their biggest earner from their wage bill. In that sense, Real's decision to sell Ronaldo made as much financial sense as Juve's to buy him.

The Bianconeri were notat the same level, commercially, as Madrid, and they still have much ground to make up in that regard.

But the 'Ronaldo effect' has helped them close the gap. He has opened up numerous new markets to the Old Lady.

However, there was also, as Juve president Andrea Agnelli was at pains to point out, an important sporting aspect to the transfer: the Bianconeri had notwon the Champions League since 1996; Ronaldo had fired Madrid to four in the preceding five seasons.

However, neither Real nor Juve could currently claim to be among the very best teams in Europe, as their most recent results underline.

Madrid are rightly delighted at having just claimed a first Liga title since 2017, but their cause was greatly aided by current chaos at Camp Nou, with Barcelona stumbling from one crisis to another under president Josep Maria Bartomeu.

Zidane Zidane is arguably ahead of schedule in his rebuilding project at the Bernabeuafter the club went into free-fall in 2018, with his departure coinciding with that of Ronaldo.

Real own a number of hugely exciting and promising players, some of which are presently out on loan, but several players who proved integral to their unprecedented Champions League success are now the wrong side of 30.

In addition, while Karim Benzema has excelled in Ronaldo's absence, there can be no denying that Real have still to adequately replace their all-time record goalscorer.

Eden Hazard was meant to go a long way towards filling the void but the Belgian has been blighted by injuries since joining from Chelsea last year.

Madrid, then, remain a work in progress. The future looks bright for the Blancos but, presently, they are nothing like as threatening as they were with Ronaldo, who made a habit of bailing them out of jail with his lethal finishing.

He has tried to do likewise at Juve, but to no avail.

Ronaldo's heroics – the second-leg hat-trick against Atletico last year was vintage CR7 – have not proven enough to carry an unbalanced and ageing Juventus squad to Champions League glory.

He may have always dominated the headlines at Madrid, but the squad he was part of boasted numerous big-game players, including Benzema, Gareth Bale (when he was fit and focused), Luka Modric, Sergio Ramos, Toni Kroos, Isco and Marcelo.

Aside from Paulo Dybala, Juve do nothave anything like the same level of game-changers, as underlined by their painful lack of penetration from midfield.

It istelling that the Bianconeri are not being beaten by Europe's elite. There was arguably no great shame in going out to an exciting and young Ajax side last season, but losing to Lyon this year was just plain embarrassing, and ultimately cost Maurizio Sarri his job.

It is also telling that Juve have scored just seven goals in the Champions League knockout stages over the past two seasons; and Ronaldo is responsible for all of them.

Gonzalo Higuain is well past his best yet remains the only orthodox centre-forward on the Bianconeri's books, while Douglas Costa has proven maddeningly inconsistent and injury-prone.

The midfield, meanwhile, is nowhere near the level required to compete, let alone thrive, in the Champions League.

Ronaldo, therefore, will be enthused by the fact that Juve's new coach, the iconic playmaker Andrea Pirlo, has made revamping and rejuvenating the midfield his primary objective.

However, one wonders what a now-35-year-old Ronaldo makes of the fact that the club is clearly much further away from winning the Champions League than it was when he arrived and is now starting afresh under a new coach for the second consecutive summer. Ahead of his third season in Turin, Ronaldo is already on his third different coach.

Pirlo has a well-deserved reputation as one of the most intelligent midfielders of all time – yet zero coaching experience.

Ronaldo has yet to comment on the 41-year-old's surprise appointment but he has already admitted the he has been left unsatisfied by the 2019-20 campaign.

"Winning the Serie A once again in such a difficult year is something that we are very proud of," he wrote on Instagram last week.

"Personally, scoring 37 goals for Juventus and 11 for the Portuguese national team is something that makes me face the future with renewed ambition and desire to keep doing better and better each year.

Ronaldo certainly expected more from Juve and, on Thursday, the Corriere dell Sport claimed that the Champions League exit to Lyon has left him seriously considering his future.

That's hardly surprising, of course. He did not join the Bianconeri to win Serie A. He joined to win the Champions League with a third different club– not to suffer humiliating eliminations to mid-table Ligue 1 teams.

Of course, Perez would hardly have envisaged his Real side being knocked out at the last-16 stage two years in a row either, so both men, then, could be forgiven for wondering if they ended their relationship too early.

They have enjoyed some good times over the past two years but, since that divorce in the summer of 2018, they have both known nothing but Champions League heartbreak.