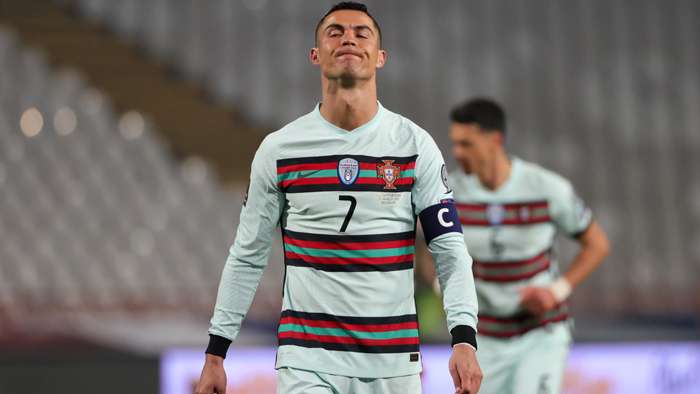 Dutch referee Danny Makkelie has offered Cristiano Ronaldo and Portugal an apology after disallowing the strikers goal against Serbia.

Portugal had to settle for a 2-2 draw in their 2022 World Cup qualifying clashafter Ronaldo was denied a last-gasp winner by the match officials.

Replays showed that the Juventus strikers shot had crossed the line beforeAleksandar Mitrovic was able to clear the ball away, but Makkelie waved play on after consulting with his linesman, which he has now admitted was the wrong decision.

"As per FIFAs policies, all I can say is that I apologised to the national coach, Fernando Santos, and to the Portuguese team for what happened," Makkelie told Portuguese publication A Bola. "As a referee team, we always work hard to make good decisions. When we are in the news in this manner, it doesnt make us happy at all."

Ronaldo was furious after seeing his goal chalked off, having produced an finish after latching onto a perfectly flighted Nuno Mendes pass.

There werestill a few seconds left to play after the stoppage time incident, but the Portugal captain refused to continueafter remonstratingwith the linesman.

Ronaldo threw his armband to the ground before storming down the tunnel, and explained his reaction in a social media post after the game.

"I always give and will give everything for my country, that will never change," he said on Instagram. “But there are difficult times to deal with, especially when we feel that an entire nation is being harmed.”

Santos also vented his anger post-match, with the Portugal boss insisting that VAR must be used at international level in order to avoid a repeat of Saturdays controversy.

"Itis not permissible that, in a competition like this, there is no VAR or goal-line technology,” said Santos. “The ball was half a metre inside the goal, there was no obstacle between the goalkeeper and the goal line. It was very clear.

“The referees make mistakes, they are human, but this is what VAR exists for.”

Ronaldo and co have to dust themselves down quickly ahead of their next Group A clash away at Luxembourg on Tuesday night. As it stands, Portugal are second in the pool on goal differencebehind Serbia, who are scheduled to face Azerbaijan next.

Ronaldo storms off pitch after being denied last-second Portugal winner