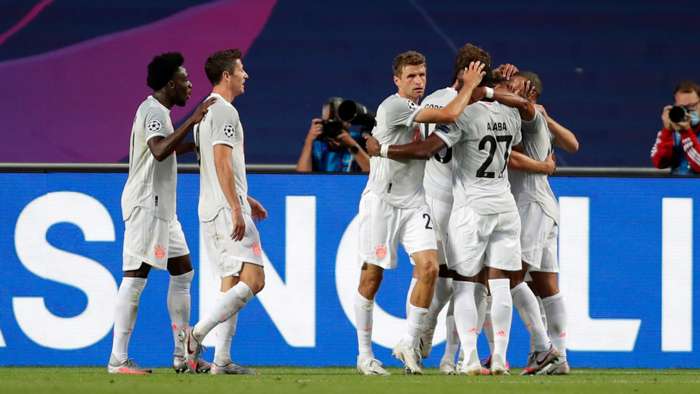 Bayern Munich chairmanKarl-Heinz Rummenigge has admitted that he was surprised by the side's muted celebrations in the wake of their Champions League demolition of Barcelona, but the former forward hailed their collective focus as they hunt European glory.

The result set a new record for the most goals in a singularChampions League quarter-finaltie, exceeding that of Manchester United's seven-goal haul against Roma in 2007, but post-match,Rummenigge has revealed that Hansi Flick's squad were not getting ahead of themselves.

"I went to the locker room after the game and I was expecting the guys to be celebratingthis great victory," the former West Germany star told Sky Sports Italia. "But I saw them there, very calmand focused instead, and ready for the next game."

Bayern'sevisceration of an aging Barca side was just the latest demonstration of their talents, with the club having won every matchacross all competitions they have played insince they resumed action in May amid the coronavirus pandemic.

Rummenigge feels that the enforced lay-off only served to fire up the squad's desire more than ever, saying: "They continued training at home when that was not possible on the pitch. When theBundesligaand theChampions Leaguerestarted, they showed that they want to play football."

The 64-year-old also took his time to praise a number of key figures at the club in helping to mastermind their pursuit of a potential treble, following Bundesliga and DFB-Pokal success, citing Flick- who succeeded Niko Kovac on a then-interim basis in November - as well as players Alphonso Davies and Ivan Perisic for their contributions.

"Hansi Flick changed our season,"Rummenigge noted."I have to admit that even we are surprised at how well he did it.

"Alphonso Davieshas an incredible pace and a great will to learn. He was bought as a left winger and is now a left-back - and as that, he is indispensable for the team today."

Perisic represents a curious case for Bayern, with the Inter loanee having extended his stay - and taken a pay cut in the process - in order to help the team complete their European quest, for whichRummenigge has professed his gratitude, while suggesting that the Croatian may yet have a future beyond his short-term stay.

He said: "As for Perisic, he may not dospectacular things, but he scores goals and gets assists. We really appreciate the fact that he'sstayed until the end of the Champions League season even though we had to cut their salaries. He hasn't made a final decision yet regarding his futurebut both I and Flick like him a lot."