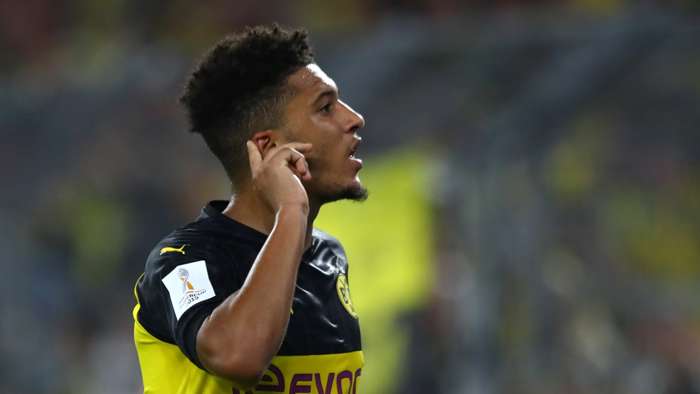 Jadon Sancho claims to be ignoring the transfer “noise” that he is generating, amid ongoing links to Manchester United, with the Borussia Dortmund winger focused on his own game and chasing down Ballon d’Or glory.

United have been frustrated in their efforts to get an agreement in place, but the summer window remains open and a club-record package could be pieced together at some stage by those at Old Trafford.

Sancho is prepared to let that saga play out without him getting involved, with the 20-year-old turning a deaf ear to the rumours which are raging around him.

Asked for his take on the “noise” by SoccerBible, Sancho said: “I try not to look at the media because I think once you start looking at all that it would be easy to get carried away with it. It can affect players.

“For me it’s about not looking at those things and just focusing on trying to do the best I can on the pitch. Especially in training.

“For me it’s about improving every single day. It’s important for me to keep a smile on my face and keep happy. I don’t really look at all the noise and all that stuff. I’d rather keep my head down, keep focus and improve every day.”

Sancho’s efforts on the field for Dortmund have made him one of the most sought-after talents in world football.

He is determined to maintain those standards, while raising his game to even greater heights, with there a desire on his part to be recognised as the best player on the planet.

“Obviously every young kid growing up, that’s something they’re looking at,” Sancho added.

“For me though, if I win a couple of Ballons d’Or, then I’ll feel like I’ve achieved what I wanted to do in this life. Obviously there’s other great goals I want to accomplish like winning the World Cup, the Champions League and all these other great things but yeah, Ballon d’Or is just like… there’s so many players in the world and to win that you would have been selected to be the best of the best.