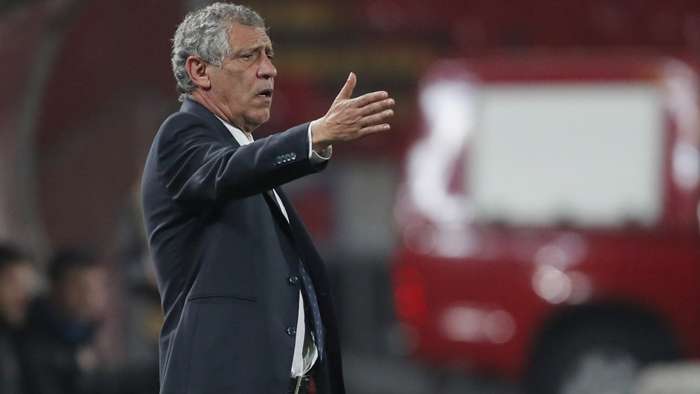 Portugal coach Fernando Santos has called for the introduction of goal-line technology in international football following the controversial end to his side’s 2-2 draw with Serbia.

With the World Cup qualifier tied in added time, Cristiano Ronaldo latched onto a lofted cross into the box and poked the ball beyond Serbia goalkeeper Marko Dmitrovic and towards goal.

Ronaldo watched intently and then wheeled away in celebration as the ball appeared to crossthe line before being hooked clear - only for the officials to wave play on.

Ronaldo continued to celebrate in front of the referee’s assistant who did not give the goal, and then pleaded for the effort to be awarded.

The five-time Ballon d’Or winner’s protests continued and to rub salt into his wounds, he was given a yellow card by referee Danny Makkelie.

Once the final whistle was blown, Ronaldo stormed towards the tunnel and tossed away his captain’s armband, gesticulating wildly as he left the pitch.

Santos would not be drawn to comment on Ronaldo’s furious reaction, but had plenty to say on the subject of technology and VAR.

“The referee apologised and I have great respect for him, but it is not permissible that, in a competition like this, there is no VAR or goal-line technology,” Santos is quoted as saying by A Bola. “The ball was half a metre inside the goal, there was no obstacle between the goalkeeper and the goal line. It was very clear.

“He (Makkelie) apologised to me but this is not going to solve the problem.

“The referees make mistakes, they are human, but this is what VAR exists for.”

Santos’ frustrations are understandable, given it appeared his side were denied a goal that would have been awarded in any of the top European leagues.

But the European World Cup qualifiers are being played without VAR, which is to level the playing field as not all grounds will have the technology available. As a result, the governing bodies took the decision to not use it in any of the games.