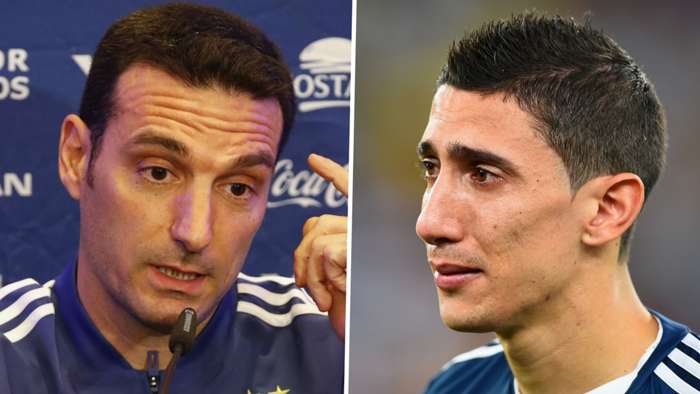 Argentina coach Lionel Scaloni has told Angel Di Maria to “support from the outside” after the in-form Paris Saint-Germain star was left out of the Albiceleste's sizeable squad for their upcoming 2022 World Cup qualifiers against Ecuador and Bolivia.

The 32-year-old believes that he is on a par with club team-mates Kylian Mbappe and Neymar, and rejected the notion that Scaloni's decision had anything to do with age, as captain Lionel Messi and a few others are of a similar vintage.

“Ifit's a matter of age and a new cycle, then Messi, Sergio Aguero and Nicolas Otamendi should not be there,” Di Maria said in an interview with Closs Continental. “If it's that, you have to do it with everyone, not just with me.

“I'm 32 years old and I'm still playing the same way. In every match I show that I can be on the same level as Neymar and Mbappe.

“I can't find an explanation, I have no words. I work my ass off at PSG to have a chance in the national team and be able to compete.

“If they haven't called me up it's because they don't want me.”

Scaloni claims that the door remains open to Di Maria, however, while also defending his decision to call up players who have been “doing their best” - though he did not offer a direct explanation as to why the attacker was overlooked.

“We haven't closed the door on anyone, not at all,” Scaloni told Cadena 3. “On the contrary. The national team belongs to everyone. At the moment, this is how things are – but that does not imply that in the future things won't be different.

“To all the boys who had the chance to play, we would like them to continue being part of the project and not remove their jerseys (retire from international duty).

“Former Argentina coach Jose Pekerman instilled in us a way of understanding football and defending the national team. They got the message and no one put on a bad face. Those who don't play should support from the outside and they understood that.