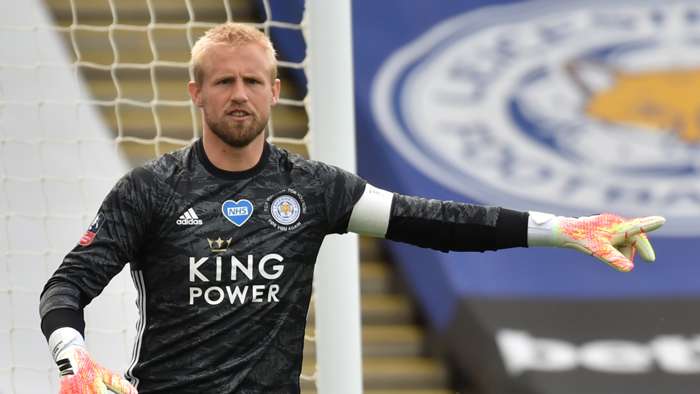 Kasper Schmeichel has easedfears over his well-being, and looks on course to be fit for Leicester City’s trip to Liverpool, after returning to training with Denmark.

Schmeichel was caught on the side of the head by Albert Gudmundsson’s knee and did appear to briefly lose consciousness, and was substituted at half-time.

Those fears were allayed by Denmark boss Kasper Hjulmand, who said: “Kasper was never unconscious. He was there the whole time. During the break, however, there was no doubt he should not continue playing.

“He looked better after the match. We have to see what it looks like from here. We hope nothing serious has happened to Kasper.”

Schmeichel provided a positive bulletin on Monday, as he returned to training with the rest of the squad.

The Danish FA released a video of Schmeichel on the training grounddoing basic drills.The 34-year-old said he has no problems and that the collision looked worse on TV than it actually was.

“It was more for the sake of safety on the doctors' recommendation not to take any chances with it,” Schmeichel said. “But luckily it was just a blow and it was not as bad as it looked. I've seen it now and it looks a lot worse than it is. I am feeling very good this morning, have slept well and am ready.”

The update on Schmeichel will be a relief to Leicester boss Brendan Rodgers as he plots a way of toppling his former club Liverpool.

But before that match at Anfield on Sunday, Schmeichel has his sights set on a clash with Belgium in the Nations League on Wednesday.

Belgium sit at the top of Group A2, but a win for Denmark wouldtake them above their opponents and Schmeichel is relishing the occasion.