Sergino is sick! - Dest revelling in time to shine for USMNT & Barcelona 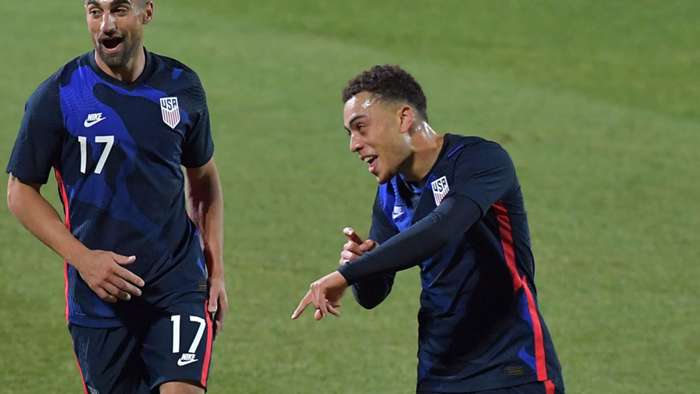 Long before he stepped on the field against Jamaica on Thursday, Sergino Dest called his shot.

The Barcelona defender arrived for U.S. Mens national team camp riding high, already in the midst of a week to remember.

In his last match before heading off to Austria, Dest matched Lionel Messis brace with one of his own in the Blaugranas6-1 battering of Real Sociedad.

However, when asked to reflect on that performance midweek, the U.S. mens national team star said he was looking for more. He wanted that first international goal for the U.S. and, with the form he was in, he believedhe could get it.

And get it he did, and in spectacular fashion, too.

"I told the staff Im going to score this game," Dest told reporters after netting the opener in Thursdays 4-1 win over Jamaica.

"I told Reggie [Cannon]... I said it before the game.I was also talking with Christian Pulisic and he said If you score, you have to do this [points to wrist] because its time. Its time. Were coming right now."

Destsgoal– a 25-yard curler from outside the box–lefteven his own teammates stunned, as he seemingly found a way to bring some of Messis genius with him to Austria.

"First of all, Sergino is sick! Hes so good, man!" raved teammate Brenden Aaronson, who scored a goal of his own in the USMNT win.

"To be a right-back whosnow playing on the left side, first of all, thats hard enough, but then he comes in on his right and just bangs ashot far post.

"But I didnt expect anything else. He has that quality."

That quality was on full display on Thursday as Dest continued his emergence as a legitimate star. His sky-high confidence from the club level carried over into the international arena, even if he was playing in a different position with a significantly different role.

In recent weeks, Dest has featured as a right wingback for Barcelona, offeredmore room to roam with fewer responsibilities defensively. Against Jamaica, though, Dest was played as a left-back, allowing Reggie Cannon to slot in on the right side.

At that left-back position, Dest brings all the same attacking qualities that he does on the right with one key difference: instead of firing crosses with his dominant foot, Dest can now cut in and take shots of his own.

And thats exactly what he did, smashing a shot to the far post that left his teammates with mouths agape.

"Thats a FIFA goal!" ???? @sergino_dest on his goal-scoring premonition and the meaning behind his celebration. #TheFutureisUS ???????? pic.twitter.com/CIMWaFUb9T

"Its really special, of course," he said of his goal. "I was playing left-back, so I was just thinking to myself, Okay, I have to score, I have to keep this level.I was just looking to come in with my right foot and just shoot..

"Obviously,I can also shoot with my left foot but today, I felt there was a lot of space in the middle, so I had to get inside and I had anopen shot.Ive practiced it, so now its good."

Thursdays performance provided even more evidence that Dests international future could actually lieon the left. With options like Cannon and Bryan Reynolds comfortable on the right, Dest is free to play on the left, where he would jump ahead of Fulhams Antonee Robinson.

Any concern of a performance drop-off from switching sides evaporated the second Dests shot hit the back of the net.

"For me, hes really strong on both sides," said USMNT boss Gregg Berhalter."I think that on the left, what you get is what you saw tonight: the ability to come inside and combine and then shoot for himself, create for himself, open up the field dribbling inside on the left wing.

"On the right side, its more of a vertical type of game. But I think both of them can be effective. Sometimes on the left, you can potentially lose the verticality of his passingbecause he plays inside, more often. Those are all things to consider.

"He enjoys playing on either side,so its not an issue."

Also aiding the argument to start Dest on the left? A developing relationship with Christian Pulisic, who played with Dest with the USMNT for only the second time.

Its a partnership with some quirks to work out, namely both players habit of cutting inside. But it is also a partnership that has the potential to run absolutely rampant against any team in the world.

Pulisic had a difficult time, as he struggled to find that final pass or shot to create anything substantial, but his movement did open the door for Dests finish.

"Its a relationship thats growing," Berhalter said. "They havent had much time to get on the field. I think this is the second time that theyve been on the field together, and its definitely improved from the last time they played together in terms of the chemistry and how theyre moving.

"I think if we can get those two guys passing and moving and having the intention to get behind the backline, it would be really difficult to handle because theyre very quick and very technical players.

"I can imagine it being really difficult for the opponent to handle that."

Certainly, few teams out there would be able to handle a Dest in this form. The former Ajax star was confident enough to dribble past several players even deep in his own half, once going on a Messi-like slalom run through the midfield.