Setien: My Barcelona fate was sealed before 8-2 humiliation 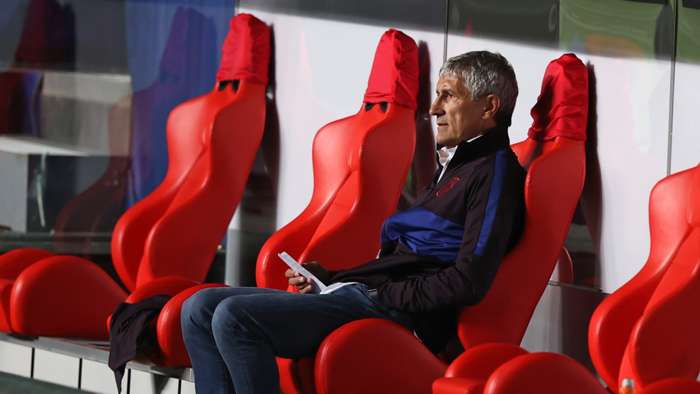 Quique Setien has claimed that the decision to remove him as Barcelona coach had been made regardless of the Catalans' historic 8-2 capitulation at the hands of Bayern Munich.

Setien's charges failed to shine, however, surrendering the La Liga title to Real Madrid despite sitting top when the new man took over at the start of 2020 amid a series of disappointing results.

His fate was then sealed definitively when Bayern ran rampant in the Champions League quarter-final, imposing a bruising defeat on the Blaugrana which led to the coach being relieved of his duties.

But Setien maintains that he would have been on his way no matter what the outcome was in Lisbon's Estadio da Luz in August.

"You end up tremendously damaged, you go into Barcelona history with that defeat," he toldex-Spain coach Vicente del Bosque in an interview withEl Pais.

"I take my share of the blame. All the same, one day I will write about it.After my sacking I found out that the decision had been made since before the 8-2. I heardabout everything."

That thrashing will be the reason for which most Barcelona fans remember Setien after his short, underwhelming spell on the bench, and he regrets not having the chance to impose his trademark swashbucklingplaying style on the team.

"When you sign for a club of Barca's dimension you already know that things aren't going to be easy, despite having the best players in the world.

"The truth is that I couldn't be myself, nor did I do what I should have. It is true that I could have taken drastic steps, but that would not have helped either in as short a time as I was there and in which everything was condensed after lockdown.

"Until that point the team was fine. We had started to change a lot of things. We went into the break two points ahead. Coming back we started well in Mallorca and Madrid's run was extraordinary.