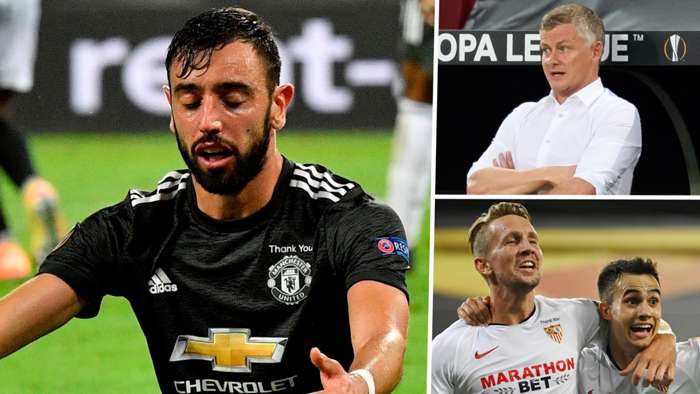 If Manchester United have learned anything from their final two Europa League matches of the campaign, it is the value of takingthe chances you create.

But a combination of poor finishing and goalkeepers in superb form has meant that their only goals have come viaBruno Fernandes penalties.

Against the Danish side that proved to be enough. Against seasoned knockout specialists Sevilla it was always unlikely to be the case.

Ole Gunnar Solskjaer can look back on a season marked by improvements all over the pitch, and no more so is that the case than up front, with Mason Greenwood having joined Anthony Martial and Marcus Rashford to createa formidable front three.

But the sight of Greenwood slumped in his seat in the stands long after the full-time whistle in Cologne illustrated the disappointment felt by the whole of the United squad as they missed a golden opportunity to win a first trophy in three seasons.

The Red Devils are now on their longest run without a trophy for 31 years, and Solskjaerhas an abnormally short summer break to find a way to solve the problems that remain at Old Trafford despite the steps in the right direction his team has taken.

Those concerns would have been far from his thoughts as United made a strong start against Julen Lopetegui's side, with Fernandes capping a bright opening salvowith a trademark finish from 12 yards after Rashford was fouled by Diego Carlos.

But having failed to add to their lead, the 20-time English champions slowly began to lose their grip on proceedings, and by the 26th minutehad been pegged back after Aaron Wan-Bissaka and Harry Maguire were both undone by Sergio Reguilon, who in turn crossed for Suso to convert at the back post.

The score remained the same until the break after a highly-entertaining first half, but it was the eight minutes immediately following half-time that United will rue.

Much like Karl-Johan Johnsson on Monday, Sevilla shot-stopper Yassine Bounou was in sublime form, making superb saves to deny both Greenwood and Martial as wave after wave of United attacks pinned the Spanish side back inside their own box.

Even when the on-loan Girona goalkeeper was beaten, his defenders - and chiefly former Manchester City midfielder Fernando - came to his rescue by putting their bodies on the line to make blocks.

United's finishing was wayward at times, too, with Fred, Paul Pogba, Rashford, Martial, Greenwood and Fernandes all fluffing their lines at crucial moments.

As the game wore on it became more and more likely that Sevilla would make them pay, and they did just that as Jesus Navas' ball across the box was turned in at the back post by substitute Luuk de Jong with just 12 minutes left.

It had been a difficult evening for the Premier League outfit, with thenumber of Sevilla officials in attendance making it as much of a hostile atmosphere as you can get in a behind-closed-doors fixture.

Solskjaer and Lopetegui regularly argued on the sidelines, with the former Real Madrid boss accusing a number of United defenders of fouls.

Nemanja Matic, meanwhile, told a number of Sevilla substitutes and staff members to "sit down and shut up" as they appealed for a penalty after the ball struck Fernandes' arm in the box. United's young side were rattled, and in the closing stages it was clear that their heads were anything but.

In what was United's 61st fixture of a gruelling campaign, they again began to look fatigued in the closing stages, though Solskjaer waited until the 87th minute to make any substitutions.

Therein lies the main problem that needs resolving at the Theatre of Dreams this summer. While Solskjaer has used the Europa League to blood youngsters and offer fring players game time earlier in the campaign, when the competition reached its business end he did not have the quality required outside of his first-choice 11 to make a difference.

It is clear that two or three new faces are required to take United to the next level. They remain hopeful that Jadon Sancho will be one while after their struggles in front of goal in recent weeks they are as determined as ever to bring in another out-and-out striker.

But as Solskjaer licks his wounds after a third semi-final defeat of the season, he can reflect on a campaign that has certainly offered more hope than the seasons that came before it.